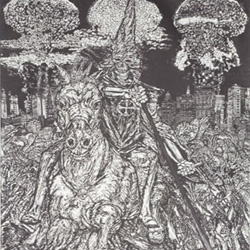 Patrick Merrill left a rich legacy that resonates beyond his 40 year career as a master printmaker, mixed media artist, and gallery director. The two concurrent solo exhibitions of his art, planned over a year ago - along with a single etching included in the 30th Anniversary exhibition of the Orange County Center for Contemporary Art – are achievements he yearned to witness. But life had other plans, and Merrill succumbed to cancer on August 31st.

Essential to understanding Merrill and the depth and intensity of his art, is knowing that his spirit and creative expression was forged in hell. He was frank about his personal history as an alcoholic, a Vietnam vet, and a drug abuser. He reached bottom in 1981 when he began his recovery by committing to a life of purpose, creativity, generosity, nonjudgmental attitude towards others, honesty, fairness, and collaboration. These attributes inform the content of his work, which illuminates the darkness of human struggles and suffering, whether personal, social, spiritual, or political. Merrill optimistically moves these subjects in the direction of healing and resolution. Through his stalwart convictions and inner strength, he overcame personal ordeals to soar as a human being and an artist.

The two exhibitions are distinct but complimentary. Although in two different locations, these two major bodies of work maintain a dialogue with each other and provide a fuller picture of Merrill’s output. The College of the Canyon’s “Conjunction: Intaglio & Relief” includes prints created from the late 1980s until the end of his life. By combining diverse techniques, he stretched printmaking boundaries and expanded the potency of the resulting images. By engaging two or more print practices in one image, he could produce an original expression of negative and positive space and shapes, which allowed him greater breadth in depicting an expanded view of humanity’s struggles. The Canyon exhibition explores a more personal psychology. He uses his own figure as an Everyman, a major trope in his work. For the artist, it is also an expression of authenticity since he is the only Everyman for whom he could honestly speak.

Merrill worked in all print media, but most often etching and woodcuts. The Fullerton exhibition explores the intersection between the apocalyptic and contemporary politics, employing symbolism previously used in the middle ages. Central to this show are six monumental prints created between 2004 and 2010, of which four are specifically focused on this theme. The use of symbolism associated with his Catholic background is not used for a religious purpose, but because he believed many people would be able to relate to that type of reference and meaning. The “Four Horsemen of the Apocalypse” references a Biblical narrative of the Last Judgment (from the Book of Revelation of St. John), and was his response to events that followed 9/11. He tiled four sheets of paper to create the horsemen in an enormous size (6 by 12 feet) to convey with greater potency his fear of a nuclear holocaust. In this series, as well as others, Merrill bridges history and tradition, addressing the contemporary dilemma of annihilation in the context of the larger panorama of history.

Debuting at Fullerton, “Alpha and Omega,” Merrill’s final print, is a diptych completed a week before his passing, with the assistance of master printer George Page. In its two panels, although consistent with his development of the Everyman trope, Merrill used his self portrait with the knowledge of his impending death. “Alpha” stands naked and erect, seems to be screaming, in an affirmation of life. In “Omega” he seems resigned to his fate, as a red background reflects the microscopic activities within his body. Also on exhibit is a series of 30 small prints that form the “X-mas” series, each created during the holiday season between 1977 to 2009, and each a mixture of a poignant, political, wry, outwardly funny, wrenching, and poetic elements. Like a journal, the “X-mas” prints take the pulse of world events, which Merrill magically encapsulates in a still innocent Christmas card.

Merrill believed that in order for printmaking to stay lively in contemporary society, the artist needs to be open to explore all avenues imaginable. The thrill of the resulting prints encouraged him to pursue more intensive experimentation, reaffirming that anything is possible. He created print editions that many would consider monoprints. Or, when he worked with Steve Horn, a ceramicist, the two developed an entirely new technique of printing on clay, kiln-firing ink into clay. He encouraged an artist who printed on marshmallows at one of the “Ink and Clay” exhibitions he curated. Another time, Merrill helped an artist print with cream instead of ink in order to pursue the idea of creating an invisible image.

While Merrill exhibited nationally and internationally, he largely has a local reputation. The richness of his output makes it easy to surmise that, once his art is discovered by a wider audience, undoubtedly, the value of what he produced will be appreciated by more than can be imagined at this painful time.