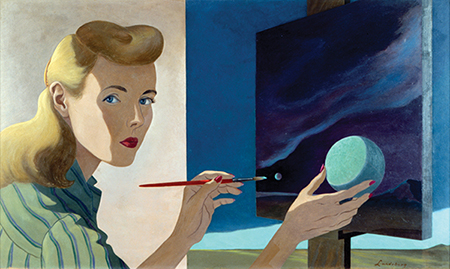 The artist’s ”Self-Portrait (with Landscape)” (1944) adorns the facade of Laguna Art Museum, announcing “Helen Lundeberg: A Retrospective” within. This carefully rendered painting of the artist, still in her thirties, is of a beautiful young woman, facing the viewer, a paintbrush in her left hand, and a small blue orb representing a planet in her right hand. The easel just beyond her, depicting a painting within the painting, illustrates deep blue space, while alluding to the artist’s career-long obsession with the metaphysical.

In 1934, Lundeberg (then age 26) and her teacher, and later husband Lorser Feitelson, published their monograph, “New Classicism,” emphasizing orderliness and classical illustration within surrealism. They also called this theory Subjective Classicism, indicating the role of introspection in their work. Some critics called this style, “Post-surrealism.” In fact, her “Self-Portrait” and many other paintings combined elements of surrealism with those of more classic works; and several of these are among the 60 works on exhibit. The show was curated by Ilene Susan Fort from LACMA, who also curated the 2012 LACMA exhibition “In Wonderland,” which featured female surrealists, including Lundeberg.

Inside the museum, the show, arranged chronologically, reveals an artist who was inspired consistently by her studies, observations and imagination throughout a six-decade career. She evolved gradually from figurative to abstract and later to hard-edge work, always maintaining impressive technical proficiency while still imbuing her work with mystery and emotion. One of the earliest paintings in the exhibition, and one of her most important, is “Double Portrait of the Artist in Time” (1935). This charming and haunting portrait features a two-year-old child (copied from an early photograph of the artist) wearing a starched white dress, white stockings and black Mary Jane shoes. Emerging from the child is a long slender shadow, representing the adult artist, culminating in a framed portrait of Lundeberg in profile, leaning on a table. The “In Wonderland” catalog states, “... the artist ... placed the child in front of the portrait, so the child casts a shadow which is that of an adult who appears in the portrait on the wall ...”

Nearby are “Self-Portrait” (1933) of the artist and “Portrait of Inez” (1933) of her sister, both in profile, and evocative of profiles by Giorgio de Chirico. Another surrealist-inspired painting by Lundeberg is “The Mountain” (1933) of four nearly naked women in a forest with a mountain in the background that echoes the female body. ”Persephone” (1933) is a symbolic painting with multiple messages that combines a fragmented head of a Greek statue, with columns and a burning cigarette, the latter representing both ancient and modern times.

As the artist matured, she evolved towards abstraction. Three renditions of her studio, from 1958 and 1959 (“Studio-Night,” “Studio-Afternoon” and “Nocturne”) are described by Fort in the accompanying catalog: “Once Lundeberg deleted the easels in the interior, presenting the walls, floor and apertures as different colored rectangles and polygons, the illusion of reality further weakened.” In these paintings, browns and beiges predominate with hints of blue. A few years later, “Desert Road” (1960) and “Sloping Horizon” (1960), also featuring browns, feature still more abstract flat geometric planes. By 1963, she had evolved to hard-edge geometric abstraction, painting on larger canvasses and expanding her palette, while maintaining her characteristic ambiguity. Paintings including “Blue River” (1963), “Looking Through” (1964) and “Blue Sky” (1966) employ deep blues and purples, while the structures are more flat and modulated than in previous works.

Lundeberg’s planet series, with several pieces measuring 60 by 60 inches, are still hard-edge and abstract. Yet they feature circular and oval shapes, several with multi-colored and fluid designs within. “Planet on Green,” “Planet on Blue and “Wild Planet” (all 1965) have intricate, organic inner shapes, expressing movement and three-dimensionality. These and several other planet paintings are intellectually and aesthetically compelling, while still conveying the mystery of her earlier works. They also demonstrate that the artist was evolving in style and execution, while remaining true to her original Post-surrealistic viewpoint.

Lundeberg’s paintings from 1970 through 1987 reveal an artist reveling in a lifetime of technical mastery and introspection. “Highlands” (1970), “Islands” (1986) and “Tidelands” (1987), her latest work in this show, are all hard-edge in style with their broad, crisply defined swaths of flat color. Yet they eclipse the planet and other series with their juxtaposition of similar colors and fluid lines, the latter extending to the edges of the canvases and drawing the eye beyond.