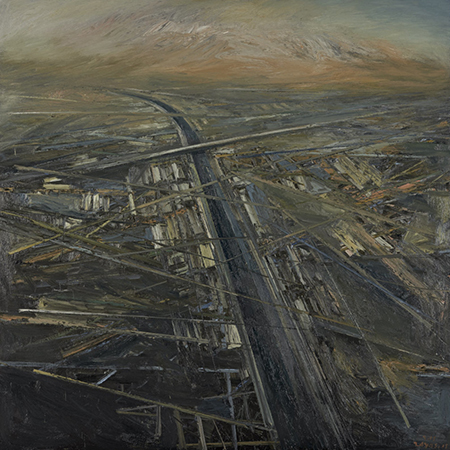 “I was born by the river,” intoned soul singer Sam Cooke some 50 years ago in  “A Change is Gonna Come.” Painter/sculptor Victor Hugo Zayas may not have been born by a river, but he has recorded the Los Angeles River’s constant evolution, from murky concrete ditch to roiling waterway to a sort of urban nature preserve filled with its own flora and fauna. Where some might see blight, others will see beauty and Zayas has captured that in countless sketches which then morph into a variety of paintings. Now his “River” paintings, accompanied by urbanscapes from his “Grid” series, comprise this selection of 40 recent works, curated by Eddie Hayes.

Born in Mexico, Zayas has lived and worked in Los Angeles for 25 years, long enough to absorb the city’s vibrancy and transpose it into paintings that hover between representation and abstraction. The “River” paintings reflect his observations and impressions while walking along the river’s banks or wading through its waters near the location of his studio. Here, perhaps mirroring his barefoot meanderings, brushstrokes appear looser, less controlled and impressionistic than in the “Grid” series, which tends to be more abstract and linear but also more colorful. A powerful aerial view of the river, dissecting its terrain filled with industrial buildings and rail yards as it winds its way into the horizon, sets the tone for the series. But then, a painting in the “Grid” series titled “LA River” departs from that norm with lose, dark brushwork and a barely articulated but still dramatic sky.

On the other hand, a dark hued, somewhat mysterious view of the First Street bridge stands apart stylistically, but atmospherically connects with Zayas’ fascination with his environment. The light seems to indicate early morning or dusk, with a rising or setting sun bathing the structure in a golden hue. The loosely rendered foreground shares the darkness.

Overall, Zayas’ palette sticks with darker hues, light tones used sparingly to highlight specific shapes. A case in point is a green-hued, loosely rendered aerial view of downtown topped by a dramatically stormy sky seldom seen in these parts and thus particularly dramatic (“Grid Series #3”). Another work, similarly atmosphere, is rendered mostly in gray with colorful slashes that not only suggest the city’s layout but, to those familiar with Zayas’ sculptures, the guns he recycles regularly from their destructive purpose into art (“#16”). A page from his sketchbook shares the painting’s genesis. The artist offers a close-up view, still from an aerial perspective, of the myriad crisscrossing highways and bridges of the city, topped by a gray and ochre sky, mirroring both its desert origins and the smog that often enshrouds it (“#17”).

Just when one might decry an element of sameness throughout, surprises like “Urban Nocturnal Series” emerge. This abstract painting, dominated by a dramatic night sky, suggests not place but movement, the essence of city life. With its somewhat even, geometric forms, “#22” makes us think of different neighborhoods, each distinct and yet similar, some socially conflicted, some placid, always in flux, never boring.