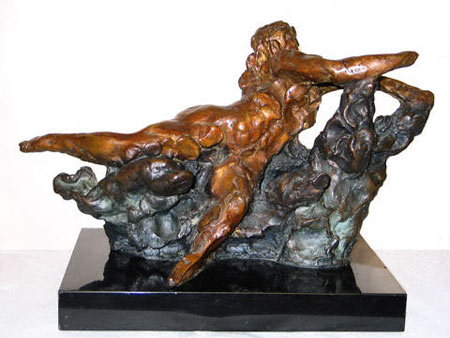 The Armenian American artist Reuben Nakian was born in the late 1890s, died in the late 1980s, and that nearly centennial arc netted the sculptor a major retrospective at MOMA, inclusion in the Sao Paulo  and Venice Biennials in the 1960s, presence in discriminating collections that simply do not acquire schlock: the Smithsonian, the Hirshhorn, the Met.

In LA we know Nakian mostly for his smaller scale bronze works, but in fact he is as or more compelling in massive scale public works that merely imply the female form using fluid or serrated masses and titillating titles, as in 'Goddess with Golden Thighs' at the Minneapolis Sculpture Garden.

His long life and art interests bookend everything from American regional realism (he apprenticed with Paul Manship at the tender age of 19), official portraiture, modernism, and conceptualism ferried to New York in the persona of Marcel Duchamp, who Nakian knew. Most significantly there was the arrival, through the 1930s and ‘40s, of European exiled artists fleeing fascism and plying hard boiled American Gothic Yanks with naughty ideas from psychoanalysis, surrealism and French Existentialism. Nakian’s most formative contact has to have been his 1935 introduction to Arshile Gorky, that fellow Armenian émigré and precursor to Ab Ex whose own production at its  best shocks us for its sophistication, and whose gadfly mythos pollinated an infectious freedom with feeling and mark-making to artists from Nakian to Hans Burkhardt to Willem de Kooning.

One can imagine that this time-out took place under the spell of Gorky whispering that Nakian ought to jettison the constraints of  his parochial American super ego, channel his deep Aegean id, and let process, materials and visceral gesture tap the big mythic, messy themes rather than tidy moments fixed in time and literality.

When Nakian emerged from this self reflection he began to make the works we know him for and which are on view here. The works draw on classical myths, and gravitate to the kinky and confounded tales that remind us how spiritually and psychologically penetrating most cultural mythology is. More of a secular spiritualist than the cliché of the sexually voracious male genius, we get the sense that Nakian selected Homer and often included biblical narrative (the “Salome” here is just lovely) not as an excuse to depict juicy nudes, or as lessons on the divine vs. profane. Rather, in keeping with his times, these seem like metaphors about what it means to be human, about the corners of the human psyche that Freud may have overemphasized, but that none of us can wholly dismiss.

So, in every great epic from the Odyssey to Gilgamesh and Beowulf, there’s a coded dialogue for our estranged, passionate relations with untamed natural forces (within ourselves, in the elements) that we are forever coming to terms with. Nakian seemed drawn for this  reason to the “Leda and Swan,” “Europa and the Bull” tales, which cast this idea of human will/passion negotiating its relation to natural forces stronger than it. If you look and ponder that lyrical swan neck resting between Leda’s thighs, you’ll get the deeper message; and if thinking is not your thing, you still get the fast read seduction of sensual surfaces, visceral opulent gestures, sonorous plays of light, and 2- and 3-D abstract forms that penetrate and caress each other with an eroticism more engaging than any billboard of Jeff Koons engaged in coitus.

Often described as an Abstract Expressionist sculptor, Nakian’s 3-D works project the 'action' of Action Painting – as well as its generic angst – into tangible space. It’s important to walk around the pieces to get how Nakian worked materials and gesture into a directed crescendo. There is nothing fully accidental here, just as there was nothing fully spontaneous about Pollock dripping. It’s skill.

“Nymph and Dolphins” is a real misfire, as are some of the drawings, but the eight inch “Europa and the Bull” shows the voluptuous masses and voids of a female form coiled atop a ferocious tumble of unreadable darker, horned metal, which Europa clearly has the better of. Feminists like me pause at gender-based classical tropes of seduction and power, but Nakian saw a twist: in Homer women like Pasiphae fell prey to the eros of brute force and abandoned all reason to run off with the bull — a story line I do not want to teach our daughters. Here, “woman” ends up being the expressive energy able to gracefully and, more important at her agency rein the beast.