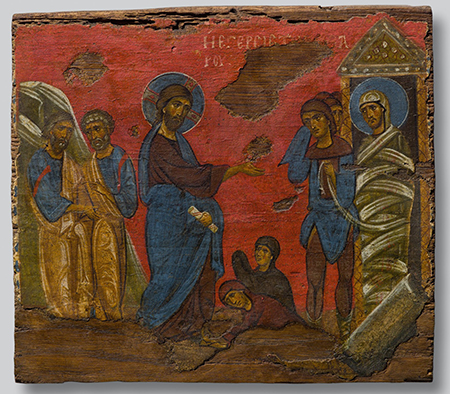 The Byzantine Empire lasted for over a millennium, from the 4th to the 15th centuries, when Constantinople (today’s Istanbul) fell to Ottoman invasion. During its time it had been the most formidable political force in Europe, and where there's power, there's powerful art to bolster and to reflect it. In art history, we learn that a high point in early Western art occurred under the patronage of Byzantine co-rulers Justinian and Theodora, who in the 6th cenutury established their capital in Ravenna, Italy. Greece was an integral part of this empire, and "Heaven and Earth: Art of Byzantium from Greek Collections" shows how much of Byzantine art and architecture is still there. This is a fascinating survey, beginning with the pagan and Roman era and taking us through to the Christian one. It features over 160 objects from 34 collections, including painting, illuminated manuscript, metalwork, jewelry, glass, embroidery, and ceramics — the largest and most important collection of Byzantine objects from Greece ever presented in Los Angeles.

For the first three centuries of the Byzantine empire, Christianity co-existed alongside pagan polytheism. Some themes and representations made the transition from pre-Christian to Christian objects of veneration. From Sparta, for example, come fragments of a mosaic floor from a large central room or courtyard of the late 3rd to early 4th century. One fragment features the sun deity or personification, with a radiating aura about his long locks of blond hair — he looks like a rock star. One can see how this attribute became halos and auras in later depictions of Jesus and angels. Even in coinage we can see the transition.  A coin circa 400 AD shows the proud profile an emperor stamped on one side and his being crowned by Nike, the ancient Greek goddess of victory, on the other. (He has one foot on a fallen, vanquished figure.) One hundred and fifty years later, another coin bears a frontal portrait of Justinian on one side and a winged angel with Christian symbols on the other — Nike, of course, was usually depicted winged. Justinian made Christianity a state religion, and he and Theodora were both political and religious leaders.

Later mosaics and paintings depict the life of Christ and of Christian saints. I’ve always found this period of early Christian art especially charming. Artists were trying to work out how to tell stories through very direct visuals, and also how to depict the human body, a complex subject (as anyone who attempts figure drawing learns) made even more so in the context of the tectonic cultural shifts of that era. They often stylized folds in clothing, and figures sometimes get very elongated and proportions distorted. The figures may look stilted and clumsy, but I find that the style grows on you, much the same way El Greco does a millennium later.

With the growing number of churches, monasteries, and other religious spaces as Christianity took hold, wall frescos became  popular. It’s impressive how fragments have been removed and preserved for display. One from Thassaloniki dated 1360-80 shows seven of the Apostles seated on a semicircular bench, about to have their feet washed — a ceremony reflecting the humility of the foot-washer, who is not shown. The exhibition features quite a few icons — portable paintings done on wooden panels, generally using egg tempera — but don’t be disappointed that a number are in poor condition, with battered edges and cracked and flaked-off paint. After all, they’re over 600 years old.

Illustrations from books are far better preserved, since books were usually closed, and there are several lovely full-page illustrations from manuscripts ranging from the 11th to the 15th centuries. Especially exquisite are those that show the four Evangelists, either writing or dictating the Gospels, complete with backgrounds of gleaming gold-leaf.