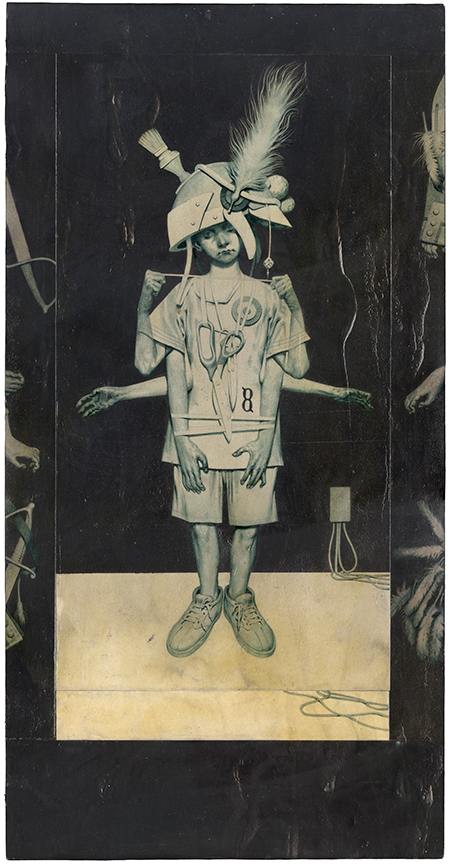 Permeated with a darkly enchanted sense of mystery, Joao Ruas’ Surrealist paintings share an inheritance with a long history of mythological and allegorical art. When Medieval and Renaissance artists illustrated the interplay between conscious perception and dreams, they developed   an iconography that was rooted in the dominance of religious narrative and symbolism. To a large part, however, nineteenth century Symbolist and modern Surrealism was borrowed from the stylistic as well as the theoretical influences of literature, frequently with tinges of religion and the occult. Since much of their context was personal dreams and imagination rather than dogma, interpretation was up for grabs.

Joseph Campbell in “The Power of Myth,” speculates on the artist as shaman, a visionary who strives to transport the viewer beyond the ordinary. Like the Surrealist artists who preceded him, Ruas adheres to that theory. By blending aesthetics with metaphysics, he views mythology not only as a theme but also as a medium. Bringing the genre to contemporary practice, he borrows from the mythologies and colorful stylizations of comic books. His admiration for the comic artist’s skills at connecting ambiguity with melodrama has led to a desire to delve into his own arcane spheres. This exhibition presents a vision of enigmatic and disturbing dreamscapes. Ruas superimposes figures, at times, against modern landscapes that include solar power windmills and power lines. Like Pre-Raphaelite artists who portrayed mythological figures against Classical architecture, the results can be jarring, aimed to create a sense of cryptic unease.

Ruas’ imaginative visions are animated with acrylic paint and mixed media elements, including graphite and watercolor. Also on view are etchings, a wall mural, a video installation and shadow boxes lit from behind by LED lights. His penchant for dramatic lighting and surreal anatomical distortions are inspired by the stylizations of modern illustrator Phil Hale. Those elements are particularly evident in his portrayals of partially nude and tattooed women. Infused with an eerie spirit, they appear as strange visitations from another realm, more exotic than erotic. Although they are covered with rhythmic decorations and outlandish costumes, they are less than sublime. They register, instead, various states of emotional distress, as if caught in circumstances beyond their control.

Inspiration is garnered not only from dreamlike states, but also from such turn-of-the century master illustrators as J.C. Leyendecker and Arthur Rackam.  It was their efforts to blur the lines between illustration and fine art that most appeals to Ruas. It’s a distinction that remains relevant to hi art, particularly since these works do maintain the distinctive patina of illustration.

Foremost in his psyche are the influences of his native Brazil, a country filled with a mix of cultures and an ethos rife with inscrutable energies and passions. A number of years spent in London came with a different set of sociological experiences, adding grist for these charged sensory visions. This fusion of contradictory forces led to evocations of a pervasive and mysterious dynamic, a type of synthesis that was popular with the Symbolists. It is notable in his idiosyncratic renditions of elaborately adorned horses and jockeys, weird masks and disembodied heads. Particularly intriguing is the recurrent vision of scissors, the psychology of which is open to speculation. The young boy in “Courage 1,” for instance, sports an outlandish hat, four hands, and a pair of over-sized scissors draped around his neck. It is a fine example of how Ruas’ many influences do not overshadow a distinctively personal symbology.