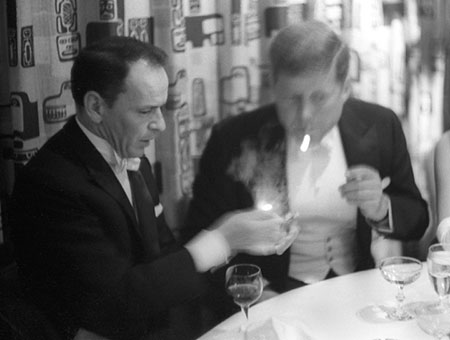 Phil Stern is now entering his mid-90s, with a career that stretches back to the Depression era. His initiation into professional photography was via the lurid Police Gazette, today largely remembered for its association with Weegee. After World War II broke out, he enlisted in the Army as a combat photographer, was shipped to Tunisia and Italy, wounded twice and awarded a Purple Heart. Back in the States, he went to work in Hollywood, where he gained access to movie sets and recording studios. He hung out with the likes of the Rat Pack, John Wayne, Humphrey Bogart, Bette Davis, and Gary Cooper. His photographs appeared in LIFE, Look, and Colliers but also on the covers of jazz albums by Ella Fitzgerald, Louis Armstrong, Art Tatum, Dizzy Gillespie and numerous others.

Stern’s career was built on access to showbiz' big names, with all the opportunities and limitations that came with access. His specialty was what he called the “human element,” which translated into, as David Friend put it in a Vanity Fair article, images of “his subjects’ hat-cocked complicity in the act of posing off-guard or suave or downright down-home.” Readers of weeklies and glossies lapped it up, eager to discover in these portraits their imaginary alter egos, the stars who are “like us” and yet, for some ineffable reason, remain distantly elevated. This essentially narcissistic captivation can turn on a dime: adulation of the stars goes hand in hand with a lust for spectacles of their degradation. Well aware of this, today’s reality shows and gossip media have streamlined the process of catering to both inclinations simultaneously.

Stern’s photos harken back to a time when discretion left room for fantasy. To the extent that they inspire nostalgia, it’s not so much for the subjects around which this nostalgia condenses as for the reserve that used to nourish viewers' desire.

The pictures on display are a group of 60-by-40-inch enlargements that go by the collective title of “Big Shots.” They include portraits of Sammy Davis Jr., James Dean, Frank Sinatra, John F. Kennedy, Marilyn Monroe, Anita Ekberg and others.

The announcement sent out by the gallery pairs two of the images on the basis of what I have to assume is the way they both capture a fleeting moment of illumination. One is of Sinatra offering a light to JFK at the latter’s inauguration party; the other is of Anita Ekberg extending her hand to shield her face from a bright light that the photographer at the right edge of the frame is adjusting. The contrasting gender roles that light plays in these two photographs is striking.

In the Sinatra/JFK pic, we have a semi-conspiratorial exchange of fire between two formally attired males, one of whom we know to have served as infatuated procurer to the other. For me, the strangest element in the composition is the print pattern (drawn from Northwest Coast aboriginal sources) on the curtain behind the two men.

In the Ekberg pic, she sits at a round table sectioned by the lower edge of the photograph, while the standing man floods her diagonally with a spermatic effulgence issuing from an incandescent bulb. Strapless-gowned and looking at the camera, she extends her arm toward the light in a gesture of momentary annoyance that for the viewer serves to focus attention on the pendant heft of her breasts. One cannot help but recall here the endless delight taken by European art in the fetching poses struck by nude females who attracted the immodest attentions of the gods, one of whom, Danaë, was the recipient of a literal golden shower, a veritable money shot from no less a big shot than Zeus himself.

A picture of director Robert Aldrich on a ladder scanning a massive screen plastered with portfolio shots of young women eager to become pinups brings to mind the sunlit melancholy that pervades Nathaniel West’s account in "Day of the Locust" of the demonic lure of Hollywood fame.

The 1953 image of a doe-eyed Marilyn blooming like a night flower out of the darkness is arresting in part because her gaze seems directed at an impassive Jack Benny, graceful hand touching his face almost in self-caress, whose profile enters the frame from the right and who seems to affect an Olympian indifference to her presence. One is inclined to attribute morbid meaning to the conjunction, but that may very well be the product of hindsight. What is impeccable is the timing. Many of Stern’s pictures are a little too transparent in their collusion between photographer and subject to arouse more than admiration for their composition. This one, though no doubt as posed as any other, retains mystery.