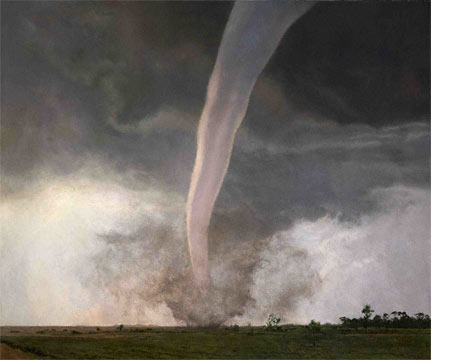 For three years John Brosio accompanied storm chasers in the Midwest, gathering actual sensory information and taking enough photographs to fuel his decades-long relationship with the All-American twister. His early tornado paintings almost seem a pretense for his unabashed love of surface and intense color. In “Breathing,” for example, the highly saturated “Yves Klein” blue permeates the entire canvas, with the omnipresent funnel shape barely visible in the painterly swirls.

“Nocturne 2” acknowledges a debt to James McNeil Whistler’s highly controversial (at the time) and generally reviled early abstract paintings of firecrackers at night, whose titles--“Nocturnes,” “Harmonies“ and “Arrangements”--sought to connect art with music. Almost totally non-objective, these darkly fabulous paintings, filled with impasto dabs and daubs, precede Abstract Expressionism, but anticipate a time when paint and paint handling alone could suffice as subject matter. Brosio ‘s “Nocturne” is a worthy heir to these seminal works. Elegant, richly hued, almost a color field painting, one barely notices the deadly storm lost in the dizzying brush strokes. Near the horizon, it is more an object of curiosity and splendor than a real threat—a thing of terrible beauty too far away to be feared. Like Whistler’s firecrackers, these early twister images intentionally de-emphasize narrative.

It isn’t until Brosio includes placid farmland and a single farmhouse in the foreground of his images, as in “Kansas Farm 2,” or an automobile, alone at night desperately trying to outrun the immense, blustery, surprisingly pink hued stormy sky of “Texas Road” that a narrative of man versus nature begins to emerge.

In “Edge Of Town” Brosio paints an eerily deserted street in the kind of small town where nothing ever happens--except very, very bad weather. One silhouetted, seemingly unconcerned pedestrian crosses the street nonchalantly unaware, or perhaps in denial, of the black, snake-like cloud of destruction inexorably approaching. The palpable and strange disconnect between the ominous impending twister and almost certain devastation in its path, contrasted with the calm of the pedestrian, begs a question: Is it human proclivity to ignore what we cannot control? Is it a paralysis of helplessness that leads us to pretend that our houses will protect us against flood, earthquake, fires, volcano’s, and yes, tornados?  Is it hubris that we continue to build on cliffs, in canyons, on riverbanks, in forests and at the feet of volcanoes, almost daring nature to dislodge us?

Brosio is a master of the frozen moment right before the dreadful is about to happen. We become a witness, but are just rubbernecking, powerless to affect the outcome. We are stuck in this dangerous, unpredictable netherland--a place of eerie unreality--like a bad dream. Not unlike Chauncey Gardiner, in the 1979 film “Being There,” we “like to watch.” Brosio’s works are an ode to the human capacity for self-deception and inaction.