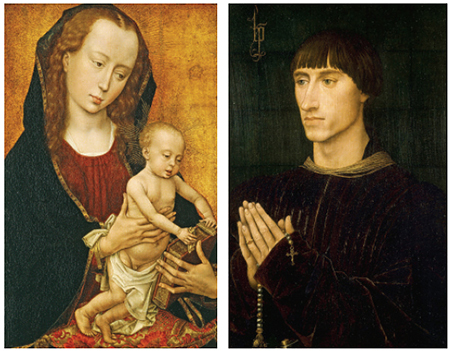 There are just 35 paintings and illuminated manuscript illustrations in “Face to Face: Flanders, Florence, and Renaissance Painting,” but what gems they are – covering one of the most pivotal moments in the history of Western art. More than the quality of the individual works, taken together they ambitiously address the influence of Flemish art on Renaissance Italy during the 15th century. It was a time when Flanders was under the rule of the dukes of Burgundy, who spared no expenses when it came to commissioning and buying fine art in the form of objects of Christian devotion and portraits of themselves and their family. The city of Bruges burgeoned as a center of commerce and art, with Jan van Eyck based there and Rogier van der Weyden not far away in Brussels. Both would become favorites of Italian royalty and merchants, including the Medicis. Hans Memling would also become popular among these elites, having worked in van der Weyden’s workshop before setting up his own in Bruges.

These artists worked in a meticulous new realism, giving expression and character to faces, and deftly recreating textures and folds to clothing. The fact that all three of these artists are in the show is a coup, as their works are hardly plentiful – most of this show has been borrowed. The paintings in the first gallery alone would be worth the trip. As you enter, you see a showcase containing a diptych by van der Weyden. One is the Huntington’s own celebrated “Virgin and Child” (circa 1460). It’s true that the proportions of baby Jesus are rather strange, with overly long limbs, and the left arm of the Virgin embracing him also seems to be overextended, but overall the quality of painting and the composition are exquisite, and the rapt attention the mother pays the child engages us. The accompanying portrait of Philippe de Croy, shown in three-quarters with hands uplifted in prayer, is a solemn study in devotion; it’s on loan from the Royal Museum of Fine Arts in Antwerp, Belgium. (Yes, it’s common for diptychs and triptychs to become separated over the centuries.) On the wall to the right are three portraits of Christ. Two are from the sublime hand of Memling and the third is a copy of "The Man of Sorrows Blessing" by Florentine painter Domenico Ghirlandaio. Such was the fame of the Flemish painters that artists not only emulated their style, but some even copied their existing paintings. This is a must-see for students of art history, but really for anyone who loves painting.