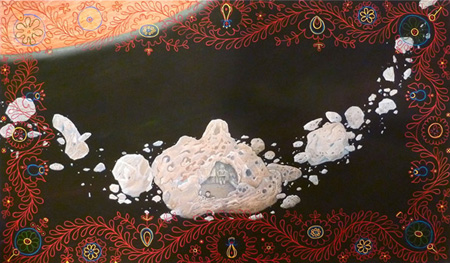 Nancy Jackson sets the stage for our journey out of the ordinary with “Interior,” a modestly sized gouache and ink work on paper. Displayed on the entry wall of the gallery, it establishes the muted pastel pallette and passion for ornamentation that instantly informs us that we are “not in Minimalism anymore.” Those familiar with the work of Florine Stettheimer, an introspective early 20th century artist best remembered for the innovative cellophane and lace sets she designed for the 1934 operatic production of “Four Saints in Three Acts,” may discern echoes of her concerns in Jackson’s output. Both New York-based women - if separated by time - effectively incorporate references to transparency and luminescence into their art, suggested metaphorically here in the diaphanous drapes that frame the windows of Jackson’s “Interior” and the slightly off center reflections she captures in her ornate vanity mirror.

Jackson’s “Paraportal (Photo-Op)” invites viewers to center themselves under a delicately colored, conscientiously constructed, ornamental cut paper construction that serves as a framing device. After realizing that each viewer's own image appears relatively small when the totality of “Paraportal (Photo-Op)” is present in their camera’s view finder, visitors may conclude that, like Alice complying with instructions to “Eat Me,” they can grow their size relative to the artwork simply by stepping out into the room, away from the wall and closer to the camera.

When visitors have their backs to “Paraportal (Photo-Op),” the ceramic elements laced together in “Space Lace #1-9,” hung sky high on the opposite wall, are most clearly visible. Jackson wears a necklace similar to elements in the wall hanging, reinforcing her shaman-like appearance in Grant Mudford’s insightful photo portrait, featured on the gallery’s invitation to this show. Next to the artist, enthroned on a mountain of pillows, is “Blue Tree,” an enchanting assembly of intricate jewel-like elements that is a worthy tribute to Jackson’s complex sensitivity to color, texture, pattern and form, and most likely a coincidental acknowledgement of Stettheimer’s posthumously published book of poetry, “Crystal Flowers.”

Also amazing on an intimate scale, are the four works in Jackson’s “Cozy Bubble” series, featuring doll sized beds centered in protective shell-like frames, with a variety of interiors designed to provoke delightful dreams. On the opposite end of the size scale, elements composing Jackson’s wooly installation “Shagman,” evoke an evening of carnival fun, intermixed with Mike Kelley’s incredulity. Even though “Streetsweeper 1” and its twin, equipped with brushes that serve as tails, add touches of frivolity, a disconcerting element clings to this work.

The scene-stealers in this show tend to be the intricate, multi-media sculptural pieces exquisitely fabricated by Jackson. But those who pay less attention to the half dozen paintings Jackson positions throughout the galley, performing like poetic chapter headings and sign posts, may miss subtle innuendoes embedded in the artist’s work. The most autobiographical of Jackson’s flat, framed creations may be “Blue Bubble,” a collage constructed out of gouache, pastel, watercolor, and thread on paper. In it we see a figure resembling the artist strolling nonchalantly on an embossed, biomorphic sky blue platform of her own creation, orbiting above the curved surface of the earth. Carefully observed, this painted work and other fantasies created by this intuitive artist compel us to take time to dream, adjusting our perspective to fully examine each work we encounter in her enchanted world of possibilities with a sense of wonder before continuing down the path towards the next adventure Jackson has in store for us.