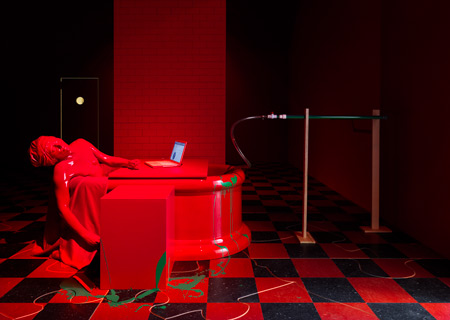 “Ain’t Painting a Pain,” the title of this show, is a humorous jab at artist Richard Jackson, who has spent much of his career throwing and pouring prodigious amounts of paint onto installations, many of them room-size. Eleven of these installations, created 1970 to 2011, along with numerous drawings for finished works, fill the museum to the brim; a new outdoor piece titled “Bad Dog” is a 26-foot high puppy that functions as a sentinel to the side of the museum.

Jackson (descended from Andrew Jackson) has spent much of his career exploring and inventing numerous methods of how to apply paint. As exhibition curator Dennis Szakacs writes in the accompanying catalog, “Canvas, paint, space and even time were each reconfigured, often simultaneously in a single work. Stretched canvas was transformed from a surface to receive paint into a device for applying it … Paint was ... indiscriminately poured, smeared, spattered and thrown.” As historic photographs indicate, the athletic artist throws not only paint but also his body onto the canvasses and installations while working on them. He is known to destroy one painting in order to create another, particularly large-scale “wall paintings” or murals on gallery walls. The volume of Jackson’s oeuvre, the large size of the individual pieces, along with the preparatory drawings, made the task of preparing this comprehensive show daunting, an effort that took nearly two months.

Jackson, an astute student of art history, reinterprets iconic works of art giants including those by Jacques-Louis David, Edgar Degas, Marcel Duchamp, Jasper Johns, Pablo Picasso and Georges Seurat. His deeply colored, “The Blue Room” (2011), a 175 x 175 x 108 inch room, inspired by Picasso’s 1901 painting by the same name, pairs Marcel Duchamp with the nude Eve Babitz, taken from the well-known photograph of the pair playing chess at the Pasadena Art Museum in 1963. A photograph, “Blue Room Activation,” depicts Jackson barefoot, throwing blue paint at the work, spinning like a whirling dervish. The contrasting bright red “The Laundry Room (Death of Marat)” (2009) is a recreation of David’s 1793 “Pieta” of the French Revolution. But here, Marat lies inside a red tub, facing a red laptop.

The artist's monumental stacked painting, “Big Ideas - 1000 Pictures” (1980), is a floor to ceiling, 30-foot long, more than one-foot deep installation, displaying the sides of stacked paint-dripped canvases; the massive size becomes a metaphor for this artist who creates obsessively. “Untitled (Maze for Eugenia Butler Gallery)” (1970), recreated for this exhibition, is a 20 x 20 foot enclosure with 9-foot high walls of stretched canvas and painted architectural space. It has to be viewed in parts and is experienced differently upon entering and exiting. His room installation measuring 141 3/4 x 432 x 360 1/4 inches, “1000 Clocks” (1987-1992), features clock hands and numbers that cover three walls and the ceiling. It was premiered in the “Helter Skelter” exhibition at MOCA in 1992. His site-specific “Wall Paintings” are made by sliding wet canvases across the gallery walls, resulting in wildly colorful abstract murals, nearly 80 feet long. The original canvas - the tool for application in this case - is destroyed in the process.

Particularly representative of the artist’s obsession to challenge the limits of traditional painting practices is his in-progress 11 x 16 1/2 foot, “La Grande Jatte (after Georges Seurat)” (1992-present), created by dipping pellets into paint and firing them from a pellet gun at the canvas. While 90,000 shots have been fired so far, the painting is only 10 percent complete. As Jeffrey Weiss writes in the exhibition catalog, “Without abandoning painting practice, or even displacing it, Jackson for a time, turned painting into an event.” In fact, the sheer magnitude of this exhibition, as well as the cleverness and scale of the works, reveal an artist of magnanimous vision, energy and drive. Today, at age 73, Jackson is receiving his first retrospective and an overview of those kinetic decades makes us part of the action.