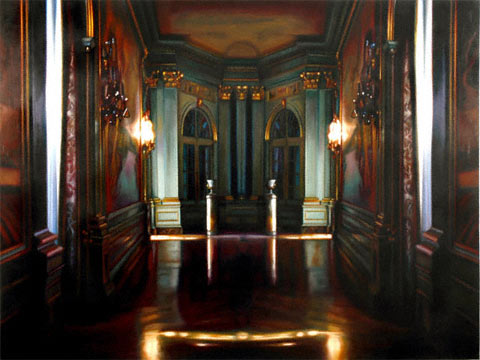 For her exhibition entitled “Phantom Spaces,” San Francisco-based painter Patti Oleon depicts period rooms and lobby spaces that are illuminated by both natural and artificial light. Oleon's process has been to make photographs of the rooms, taking advantage of the camera's ability to distort and flatten space. Evident too are the particular qualities of light captured by now obsolete Kodachrome film. The glow from interior lamps emanates a warmth that is contrasted with cool natural light, flowing in from the windows. She indulges in these juxtapositions of opposing luminosities, translating them into a bracing visual encounter.

Oleon is aware that the properties once specific to photography--to freeze a moment in time and to frame reality--can now be manipulated through digital imaging. Using Photoshop's tools and filters, the artist not only tweaks the lighting, but also experiments with creating “ghosts” through blurring and doubling. Oleon also uses the program to mirror her subjects, creating optical illusions which she then recreates in exacting detail with paint on canvas. While a precedent for Oleon's approach to her subject might be Candida Hofer's photographs of architecture, her desire is to imbue these spaces with the glowing qualities of oil paint. The layers of oil and varnish are applied with an old master's skill and determination.

Oleon emphasizes their claustrophobic side of her structures. She delights in windows and walls that capture and reflect light, yet adds to the visual play with depictions of terrazzo floors. In "Plant" and "Courthouse" light bounces off the illuminated floor, creating complex intersections of shadow and light. Oleon replicates the institutional feel of the building while simultaneously capturing the magic of the light.

"Double Curtain" duplicates an image of light coming in through a window whose curtains are drawn, superimposing one window over another, thus creating the illusion of a third window. There is a distinct feeling of pleasure in her painting the light as it hits the floor and reflects off various surfaces. In "Head" the windows are mirrored so as to distort the reading of the space. The trees seen through the gauze curtains allude to the “head” of the painting's title, the eyes of which are no more than the brightest reflections.

"Head" and "Double Curtain" focus on the details of light coming through a window that project a cool blue aura onto the interior space. In paintings including "Black Light," 2008, "Grand Ballroom" and "Red Museum Interior," she paints the glow cast by indoor incandescent lights.

In these paintings there is a central vanishing point where duplicate images meet like a Rorschach test. The mirroring of the furniture, the wall decoration, as well as floor patterning create complex relationships that transcend one’s understanding of physical space. By grouping these works under the title “Phantom Spaces” it is evident that Oleon is interested in the otherworldliness of her manipulations. Although she starts with what is real, through multiple processes of manipulation—camera, computer and paint--she creates fantastical places that beckon scrutiny.

The gallery also presents a selection of small scale paintings by Laurel Bustamante that are inspired by "the quiet intensity of nature and its stylized depiction as found in 18th century textile design and Persian miniatures." She concentrates on images of birds, placing them in a variety of painted backgrounds ranging from deep black and impenetrable spaces to more fanciful and colorful spaces interspersed with linear depictions of trees and other elements from the natural landscape. These peaceful and charming works imbue their subjects with both personality and wit. Although only five by seven inches they feel larger than their diminutive size.