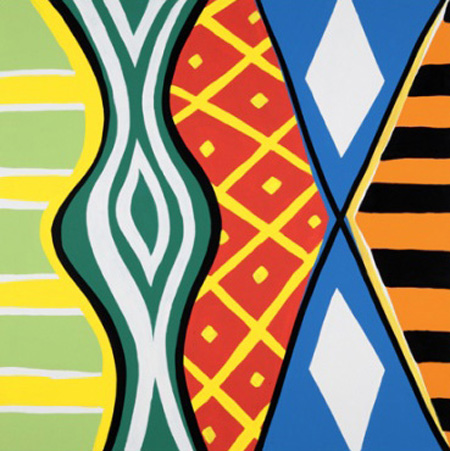 Take one look at the announcement photo for Kim MacConnel's sixth solo show here and you'll know you're in for a riot of color. But not one without structure; MacConnel employs an approach that is equal parts systems and intuition. Each panel is divided into three or four columns, or vertical panes, within which slightly irregular triangles, parallelograms, half-ovals, and the like face off with their respective borders, whether negative and/or positive space. Given suggestive but ultimately minimalist titles such as "Bunny," "Rabbit," or "Dove," his latest bodies of work – including a mural-sized, multi-panel piece that was included in his retrospective "Collection Applied Design," at the Museum of Contemporary Art San Diego (October, 2010 to January, 2011) – have ditched acrylic on canvas in favor of enamel on wood. Are they more finite? Probably. Sexier? Definitely (or maybe it's the other way around). MacConnel has never been shy about wielding palettes of unadulterated primary and secondary colors, though typically he balances in just enough sections of black and/or white to give one's eyes room to breathe; still, they're far from sedated.

Most commonly associated with the Pattern and Decoration movement going back over 30 years, MacConnel has in recent years stepped beyond that niche. The residual mechanics are still there in the process, an intuitive series of steps based on what works with what, but the resulting forms and configurations are now limited to shapes, albeit ones with vague, non-insistent associations (African designs come to mind).

Many of MacConnel's recent abstractions are responses to imagery found in Picasso's "Girl Before a Mirror" (which, for his own series, MacConnel dubbed "Woman with Mirror"). For this body of work, "ABRACADABRA," he wanted to make a departure. His goal became to make "hard-er edge" abstraction, as he puts it, and that meant the kind of super-sharp lines that can only come from high gloss enamel. The lines are never taped, however, and so the result is that the human hand remains, along with a note of levity, the light-heartedness that has underscored MacConnel's gestures, sans interruption, since the '70s.

The irony here is that although the paintings bear some resonance of a hand-crafted sensibility, they're executed with a system-based sequence in which MacConnel limits his vocabulary to a shortlist of shapes and colors. As the paintings accrue through that process, his choices become increasingly challenging – both to avoid repetition, and, one presumes, aesthetic malfeasance – what MacConnel refers to as a "kind of visual Sudoku." It's an approach that aligns with a now not uncommon art-making refrain: 'impose a system of limitations in order to attain the most freedom.'  While working within these constraints dictates the process, MacConnel still has to make intuitive, aesthetic choices each step of the way.  So when one approaches the visual riot, the rebel army of shapes and colors that plays in concert more than as a gathering of several individual panels, one may be able to sense both the order from the system of constraints, and some of the magic, together.