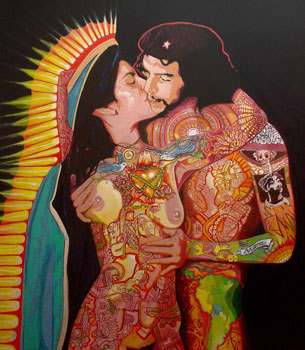 Initially an odd paring aesthetically and conceptually, Francisco Letelier and Bobby Rojas appear to have nothing in common when viewing their work. Yes both artists are Latin American, a commonality that seems superficial considering the significant differences in style, content, and influence. Both have worked outdoors but their process of creation differs. The context of Los Angeles makes their differences the very point of this exhibition. It’s the departure that each artist takes with culture that reveals interesting aspects of their work.

Rojas looks within and engages books, media, and popular culture with a darkly surrealist aesthetic that changes innocuous imagery into eerie compositions. By contrast Letelier is known for engaging sub-cultures within the community, immersing himself within heavier themes of politics and violence. His work educates through a diverse number of symbols and juxtapositions that can be agitating based upon the artist’s strong views.

Letelier is a traditional muralist who wrestles with issues related to the site and community as he plans a project. However, this exhibit emphasizes the personal. Images like “Buddha Chick” display a blending of cultures and information that are disquieting. The painting depicts a suggestive but stylized female figure that is clothed in simple undergarments. This lack of clothing reveals a host of patterns on her body. The unmistakable face of the Buddha absorbs the woman’s face, creating an uncomfortable tension between sexual propaganda and a symbol of peace. “Che y La Guadalupe (San Ernesto de La Higuera y Tonatzin)” pictures the revolutionary Che Guevara passionately embracing and receiving a kiss from Catholic icon, the Virgin Mary. It’s a suggestive and sexual encounter that symbolically unites the sacred and political. The oversaturation of imagery is difficult to engage but expresses the artist’s passion for his beliefs.

Rojas’ cartoon imagery swirls around the canvas as though caught in a slow moving vortex. The pop-inspired paintings reflect sources from television and mass media. Animated movie characters Roger Rabbit or Clocksworth make appearances among other disembodied creatures in the painting “Luna.” Perhaps even more suggestive of Rojas’ dark humor is a painting that features four floating balls that appear to be escaping from a labyrinth with the shadow of a hand in the distance. The toy balls, called “Madballs” (also the title of the painting), were a popular product with children in the 1980s and one of those gross-out products aimed at young boys. The baseball sized foam balls featured the faces of mutated monsters, humanized objects that added a new silly and macabre dimension to playing catch. Rojas appropriates these now forgotten relics. Horn Head is a one-eyed, horned purple creature, a parody that Rojas aggressively shoves at us so as to suggest that it belongs to us whether we want it not.

Rojas’ cartoons fly toward the viewer, while Letelier’s symbols confront with aggression. Combined it’s an exhibit full of passion that is difficult to take but also difficult to shake.