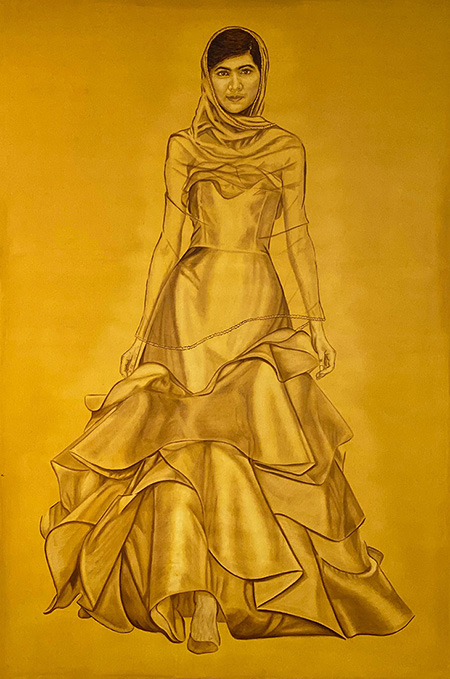 At a time when so much media attention is devoted to the malevolent deeds of societal and political “deplorables,” J.J. Martin’s exhibition “Role Models” provides welcome physical and mental space to contemplate the accomplishments of those who have worked to advance the greater good. Specifically, Martin pays tribute to 27 individuals who have been awarded the Nobel Peace Prize. He conceived the idea while thinking about what it is to be a role model as a respected leader within the LGBGTQ+ community and as a parent to four children that he and his husband have adopted and raised.

To pay homage to each, Martin painted individual life-size portraits in a style recalling the “Men in the Cities” imagery of Robert Longo, in that each figure is depicted in gray scale and isolated against a barren background in an active pose. In contrast to Longo’s figures, however, Martin’s portraits are anything but contorted and angst ridden. They are, in fact, treated like superstars who appear quite jubilant, athletically fit and youthful looking. These “Role Models” wear high fashion, a feature that subtly asks why they don’t receive the kind of cultural visibility reserved for celebrities who are often photographed that way.

The paintings are presented adjacent to one another as a running frieze that wraps around the gallery. In most of them, the honorees are shown walking (or in two instances riding a bicycle) towards us, which seems to signify metaphorically that he or she is advancing progress. And more significantly, each appears within a yellow background, which sheaths them in a golden light and links their benevolence to the artist’s idea of divinity. In a statement on his website, Martin cites the I Ching, noting that the sun “has been the inspiration for the conception of most of the representations of God” and that “Yellow is the color of the center, it indicates what is right, what corresponds to duty.”

The exhibition also includes two related series of grouped circular mandalas made by digitally deconstructing the portrait images and rearranging the fragments into dazzling patterns printed on highly reflective aluminum surfaces. Martin created the mandalas during the pandemic lockdown period as a means of coping with his anxieties by practicing a meditative creative process. In so doing, he shifted from articulating about those who have striven for universal peace to the more personal subject of the quest for peacefulness within the self. Twenty of Martin’s mandalas have an affinity with traditional religious ones in that they are geometric abstractions, while 14 of them include smaller scale versions of his Nobel Laureate portraits, with the figures emanating from their centers. Continuing Martin’s interest in the sun as the divine generator of spiritual energy, the majority of the mandalas are printed in gold.

In the final section of the exhibition, we are invited to sit and watch a projected video animation in which the mandalas, with the portraits integrated into them, are set into kaleidoscopic rotation. Although conceived as a draft for a future immersive installation, the video is very effective in its present form. As its imagery continually breaks apart and reassembles through a process of visual morphing, it is exhilarating to view; and as the end point to the exhibition, it leaves us thinking about all we have just seen, and to reflect upon Martin’s principal message that happiness can be achieved simply by paying it forward.