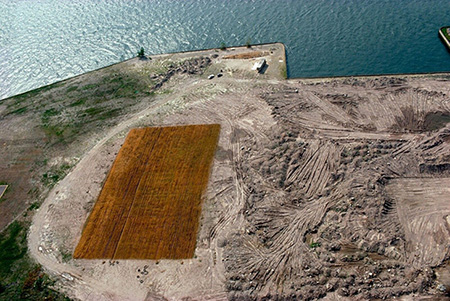 I’ve been invested for decades in repeating my connection to the process of disposal, decay and rejuvenation in new form. For the most part that has defined my approach to process, a cyclical structure that miniaturizes a lifetime into a non-threatening timeline. It’s a way of observing from a godlike perspective what I know is eventually going to be personal. We engage in this compression all the time, it’s a banal way to inject purpose and action through life rather than lying around, passively waiting for the inevitable. By exercising this power in aesthetic terms, markers are left in the world forming a manner of speech. The most commonly understood products of this impulse are meant to resist or stand outside of nature. The sculptural practice of carving form out of hard rock or casting molten bronze is one of the easiest examples to grasp this principle. The Egyptians, Greeks and Romans obsessed over this. For whatever reason, I crave just the opposite.

So naturally artists who focus on recycled materials or the reassembling of discrete parts into new wholes tend to strike a chord with me. The early terrarium jars of Alan Sonfist, a noted if not quite first tier land artist, awoke me to the possibilities that art created to decay over time could hold the eye in the moment while enticing the mind to project ahead. They fused the traditional function of the vanitas to larger ecological issues that were at the time just beginning to emerge — this was in the 1970s, when we first began to see Mother Nature on the run. What most struck me about Sonfist’s enclosed ecosystems was their melting quality of color and form. These oddball terrariums were a minor stop on Sonfist’s aesthetic journey; he is most certainly not best known for them.

Of course Sonfist, like Agnes Denes, Mel Chin, Andy Goldsworthy, Buster Simpson and others, was much more frequently drawn to sculpt the Great Outdoors itself, not just place things in it. Denes’ lower Manhattan “Wheatfield—A Confrontation” (1982) memorably said of her golden minimalist rectangle, placed that summer smack into the most vertically developed piece of real estate on the planet: “I decided we had enough public sculptures of men sitting on horses.”

This, asserted about 40 years ahead of the current movement to topple General Robert E. Lee and numerous other expressions of white supremacy from public admiration, is an example of aesthetic thinking that anticipates a much later political impulse.

Denes revisited this classic gesture as recently as 2015 in Milan. The spirit by then had become more communal and relaxed; while the political rhetoric informing it has only become more urgent. Artists such as Denes and Sonfist gained public attention in good part for the audacity of their grand ambition in the face of a public generally not ready for it. But it was Sonfist that I encountered first, so the images stuck in that manner of youthful first impressions: they shape your subsequent thinking disproportionate to their larger significance.

Denes and Chin were very effective in imposing aesthetic form onto nature. The political polemic that each produced in many of their major projects expresses their desire to catalyze a transformation of society. Chin’s ability to add layers of performance that involves large numbers of participants (including public school students in the case of the lengthy “Revival Field” project) is excelled by very few artists. Some of my own projects (publishing and otherwise) have been miniaturized echoes of his expansive example, and have mainly served as a reminder that I am an intimist.

Which brings me back to Sonfist’s little jars. They relate to those artists who would monkishly devote themselves to the grind of producing something small and complex. One of my early teachers, Max Hendler, spent a decade on about a square foot sized watercolor of a patch of dirt. That act of devotion bespoke fragility at the same time that it articulated eternity. Man that turned my head around. I saw it in the illuminated manuscripts — literally the product of monks — that remain on permanent view at the Getty Museum. Tim Hawkinson more recently used his own nail clippings to construct little birds that occupy one small corner of one of the most eclectic bodies of work I know of. These were investments of something deeper than time. They just asked to be overlooked or disposed of. But their vulnerability and image reveals some very, very deep roots. Whether smashed by some boot heel or gradually decomposed over time, their essence feels stronger than the forces that grind them into oblivion.

Just a few days ago a local art center in Pomona sent in a video of a veteran local photographer, Steve Thomas, who shot a series of images from his compost pile. Thomas takes a low-key joy in simply observing what’s there and what it looks like as it changes. While not exactly revelatory, the images drove me to refresh my acquaintance with my own backyard compost pile: the transitional state of kitchen scraps, the cloud of fruit flies, the finished dark stuff that emerges out of the bottom of the bin. And I saw Sonfist’s bottles and Denes’ wheatfield. I felt the moment in the cycle that August represents, the height of the summer season as it starts to decay into fall. I brushed my hands in the dirt and felt history, not from last year to this, but the millennia present right there on the surface. For all of the basalt and marble and bronze that has bulled its way into the present from the ancient world, I saw in the compost’s decomposition what immortality really means.