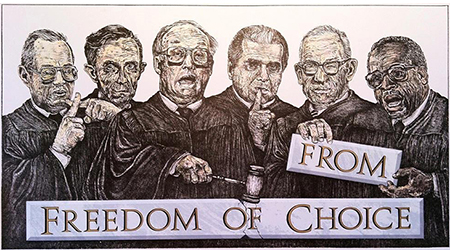 In 1992, political artist Robbie Conal published one of his most iconic prints.  Entitled “Freedom from Choice” and created to support Planned Parenthood, the print depicts the five Supreme Court Justices, all male, who voted in 1991 to uphold “Rust vs. Sullivan,” which prohibited doctors in federally-funded family clinics from mentioning the word “abortion” to their patients. Anti-Choice Clarence Thomas, who joined the court soon after the decision, is also present. In Conal’s print, Justices White and Thomas are shown holding a concrete slab engraved with the word ‘from’, which they will insert in place of the word ‘of’ (shown cracked by Chief Justice Rehnquist’s gavel) in a slab reading “Freedom of Choice.”

When President Bill Clinton took office the year following the publication of “Freedom from Choice,” he made two excellent decisions. He rescinded “Rust vs. Sullivan” and appointed Ruth Bader Ginsburg, a lifelong champion of equal rights for women, to the Supreme Court.  Ginsburg would go on to write important decisions advancing not only women’s rights, but also the rights of people with disabilities, voting rights, environmental justice, protection from unreasonable search and seizure, and gender equality in the workplace.

As we prepare to vote in the most consequential election of our time, we can honor Ginsburg’s legacy by remembering what a difference a new President and their Supreme Court appointees can make.