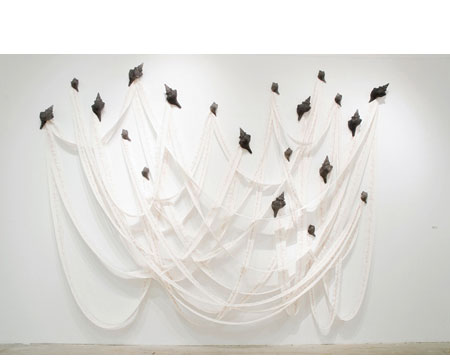 The NMMA's second biennial juried show was curated by Nicholas Baume, chief curator and director of the Public Art Fund in New York, on behalf of Friends of Contemporary Art, and featured seven contemporary artists. Applications came from everywhere, via the Internet. As Baume explains in the accompanying catalog, "Art on the Edge" is his response to what must have been a daunting array of well over 500 images. Baume stated that he chose to go for "highly resolved" works of art that would interact well. The key unifying factor was, in fact, less daring: most every work was black and/or white. In the entry gallery, Santa Fean Eric Tillinghast's vibrating pools of black fabricated steel, one a circle and the other a square, dominated the room. Roughly the size of a child's wading pool, each held an inch or two of water that rippled rhythmically. Kate Beck's untitled oil, graphite, and mica pin-striped wall pieces, including an ISBN piece mounted on a horizontal slab of aluminum, required very little of the viewer. It's one thing to make art about consumerism, quite another to make art for consumption. Her stripes, although beautiful on their own, reproduce better than they look in person--always a possibility when a show is juried through images alone. With no strong sense of purpose, Beck's pieces reflect a slick, graphical style that is quite popular--and safe--in art these days.

With the exception of photographs by Deborah Hamon, which are outstanding, and Erika Blumenfeld's classical photographs of sunlit Antarctic horizons, the exhibition continued the black-and-white theme in the next gallery. Hamon's digital C-prints of slightly outlandish suburban scenes with adolescent girls painted into the 'burb-scapes are strangely appealing--just like prepubescent girls, who really can be so awful and so delightful. Hamon's subjects wear perfectly girly outfits: pink capris, striped bikinis, and knee socks with Mary Janes. They stare directly at the viewer, confidently challenging and heartbreakingly vulnerable. Another standout, Ryan Bush's digital pigment prints of telephone wires, are so abstracted that the ubiquity of overhead wires veers from mundane, visual garbage into a vision of gossamer netting in the sky. Michael Rogers' Neruda is comprised of red text stitched onto white, thready cloth dotted with red cast-glass conch shells. It's quite pretty, but cliched. Jessica Loughlin's kiln-formed glass pieces are reminiscent of landscapes with their dark foregrounds and lighter, atmospheric top halves. They did well next to Blumenfeld's skyscapes.