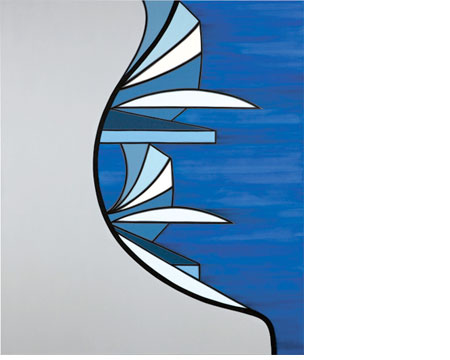 Painter Bart Exposito has been pushing forward in one, very specific direction for nearly a decade and almost every stage of the journey along the way has been compelling. And now, like a spelunker following a narrow passage in a cave only to burst through to a brilliant new chamber, he has brought forth a sumptuous new body of work that is also a logical extension of everything he has done to date. Texas-born and LA-based, Exposito got his MFA at CalArts in 2000. Since then, he has been examining abstracted form via a peculiar flatness of surface and his own uniquely reductive panache, mixing fragments from the modernist lexicon with elements of design, vernacular culture, and even seemingly traditional indigenous patterns. From one angle, his works suggested funky gameboards or a teenager's track for his Hot Wheels cars; from another, abstracted Northwest Coast Indian masks; from another, mid-1970s hypergraphics. All of these works were distinguished by forceful use of lines and outlined planar volumes, and a yummy palette that veered from pale baby blue to faded avocado to the sort of bland mustards, golds, and browns that one might expect to see on 1970s dishware.

Exposito's newest work, as displayed this spring at Thomas Solomon Gallery in Chinatown, continued his dynamic deconstruction of planar form and color. Titled "Bends," the show consisted of a suite of five paintings, each quite large at 7-by-6 feet. Made of acrylic and pastel on canvas, each composition is bisected by a curving, thick black line, marking off an area of flat steel gray, while along the curve, forms cluster against a washy color field of orange, blue, yellow, green, or red, respectively, as installed at the gallery. These shapes vary from simple shadowed rectangles, to slices of ovals, to arcing triangles recalling segments from a camera's iris, splintered to its constituent elements. As laid out, these forms resemble sails, wings, Judd-like shelves, or even, with their implied hints of landscape, retro-futuristic sci-fi illustrations. His compositions are invigorated by the contrast in textures between these flat, planar shapes and the gauzy jewel-like color fields that form their background. The result was like entering a stunning hall of geodes: although the forms are all extensions of the same code, one is nonetheless dazzled by their sensual dialogue, and by the artist's control of such contrasting elements within such a succinct and nuanced vocabulary.