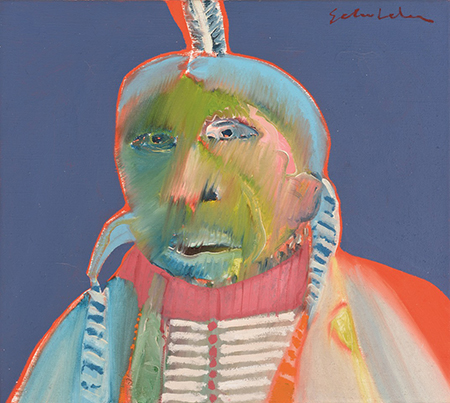 Before entering the exhibition “Art for a New Understanding: Native Perspectives, 1950s to Now,” a wall text explaining the intention of the exhibition states that the work we are about to view offers an exploration of the history of indigenous art from the United States and Canada, and at a moment when Native artists are being recognized as national and global contributors to the contemporary art world. That this assertion is made before we view any of the work, aside from Fritz Scholder’s small yet powerful “Monster Indian” (1968), disposes us to leave behind any pre-conceived notions of indigenous art at the entrance. We are to regard the exhibition within the broader context of contemporary art, while still considering the stories and culture behind the pieces. The artists on view here buttress the curatorial case for cultural revitalization.

The large-scale fabric sculpture by Jeffery Gibson (Mississippi Band of Choctaw and Cherokee), titled “Radiant Tushka,” resembles a tunic that looms large over other nearby works. It’s not only a matter of size, which vertically spans the height of the space, but its bold use of color and eclectic patterns. Gibson draws his inspiration from a broad range of interests that range from pop culture, pow wows and raves, as well as a vast influence of cultural traditions from Asian, European and Native American communities. By combining so many cultures and cultural elements, Gibson gets us to see the work beyond a narrow tribal heritage, and to consider the inevitable global influence on all contemporary art. Flanking Gibson’s piece are two sculptures by Brian Jungen (Dane-zaa / Canadian), titled “Horse Mask (Mike),” and “Supersize the Light in All Directions.” Crafted entirely of Nike Air Jordans, the pieces resemble an indigenous mask or tribal object. By combining the shoes which, in the 1990s were highly-valued objects of social status, with tribal imagery, Gibson draws parallels between the commodification of both.

The most technically impressive piece here is Canadian artist Kent Monkman’s (Fisher River Band and Swampy Cree) “History is Painted by the Victors.” The painting is derived from Albert Bierstadt’s “Mount Corcoran” (circa 1876-1877), but Monkman adds his own twist to the serene setting by depicting Lt. Col. George Armstrong Custer and the Seventh Cavalry moments before their defeat by Plains Indian tribes at the Battle of Little Bighorn in 1876. What makes Monkman’s paintings interesting and unique is their ability to combine art history and cultural commentary on the presence of indigenous people, while still mixing in a sly and cunning sense of humor. At the center of “History …” in red thigh-high boots and nothing else is Monkman’s alter ego, Miss Chief Eagle Testickle.

That playfulness continues throughout the exhibition, yet it doesn’t distract from the significance of the cultural statements being made. Lawrence Paul Yuxweluptun’s (Coast Salish and Okanagan) “Neo-Totems” are interesting sculptural forms in bright colors that do vaguely resemble indigenous totems, but are also unique forms in their own right. Shan Goshorn (Eastern Band of Cherokee Indians) uses paper, a material often used against indigenous peoples in the form of maps and treaties, to create traditional baskets, such as in “From Where We Spring.”

While the exhibition highlights some of the most innovative and impressive contemporary indigenous artists, what is missing is a historical aspect. The title suggests that the exhibition explores contemporary indigenous art from the 1950s, yet a majority of the works are from the 2000’s on. With the exception of Scholder, Jane Quick-to-See Smith (Salish and Kootenai), and only a few others being 20th-century artists. While this leaves something to be desired in terms of the historical arc of the exhibition, as a survey of the current direction of contemporary Native American art and its influence and impact on the global art community it is an emerging force.