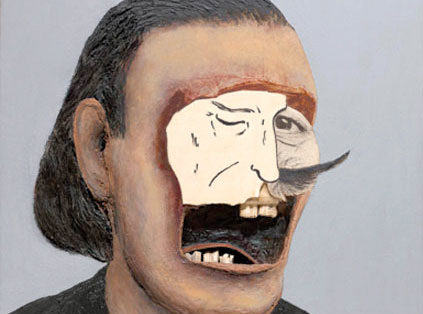 LOS ANGELES
Obsessiveness and quirky self-absorption might not be the top qualities one searches for on Match.Com, but they are characteristics to be savored in “Nine Lives: Visionary Artists from Los Angeles,” the richly engaging, somewhat loosely conceptualized group show at the Hammer Museum through May 31. Curator Ali Subotnick’s first major Hammer exhibition (she joined the museum in 2006 and curated several Hammer Projects), “Nine Lives” is a deliberately offbeat view of contemporary artistic practice in LA, emphasizing artists’ private worlds. Because Subotnick chose idiosyncratic artists whose work eludes easy categorization, the group does not fit neatly under a single thematic umbrella: indeed the show’s very title, “Nine Lives,” slyly defines the artists through their individuality. To that end, she has given each artist his or her own room so their inner worlds can be allowed full bloom. Bringing together the hip, the overlooked and the vaguely creepy, the exhibition makes a case for artists as amateur scientists, examining the world by excavating the inner recesses of their own psyche.

The show aptly begins with Llyn Foulkes. Mixing from West Coast assemblage, pop art, and a dark mordant humor that verges on despair, Foulkes’ work only grows in stature with each showing; indeed some of these pieces already seem iconic. Foulkes moved to LA in 1957; his first wife was the daughter of a top Disney animator. He since adopted Disney and specifically Mickey Mouse as a symbol of the hypocrisies of American culture. His unsettling mixed media relief The Last Frontier (1997-2005), which was displayed at Patricia Faure Gallery in 2006, presents a charred, moundlike landscape with a primitive man seated near a tourist watching TV, as a gun-totin’ mama with a Mickey Mouse head watches over a cluttered urban sprawl. Foulkes’ portraits are no less disturbing, whether it’s a grimacing Dali with real teeth or a man’s face scraped to suggest a bloody skull with zeroes for eyes: a cartoony expression of excitement but also a symbol suggesting cash register numerals, or total nullity.

Because these artists’ “visions” are most intriguing when they merge exploration of furtive terrains like sexuality, gender and identity with obsessive levels of commitment, another stand-out is Kaari Upson. Upson, previously featured as a Hammer Project in 2007, has been engaged in an ongoing project centered on a stranger named Larry whose personal items she found in 2005. For her installation here, she created her own version of the Playboy grotto, complete with faux rocks and a water-filled lagoon inset with semi-hidden, semi-erotic video projections of herself engaged in intimate acts and talk with an effigy of Larry. Peeping between the stones, one is seduced into the position of voyeur to Upson’s own voyeuristic yearning to inveigle herself into “Larry’s” life. Charlie White is well represented with several works that continue his exploration of “tweener” sexuality. In a series of still photographs, he pairs pre-pubescent girls with similar-looking pre-op transsexuals, against white modernist grids. These unlikely dual portraits attempt to locate a pre-sexual moment in female development, comparing two very different ways of being on the cusp of womanhood. His video American Minor (2008) offers a Kubrickian study of suburban teenage ennui, merging the aseptic coolness of 2001 with the simmering sexual awakening of Lolita.

Jeffrey Vallance, famous for his 1978 work in which he bought a cooking chicken from a Ralph’s, named it “Blinky, The Friendly Hen,” and buried it in a pet cemetery, brings his own form of anthropological curiosity and commitment to his work. He is represented in this show with a “brown wall” of sundry folk art knick-knacks ranging from primitive masks to antler trophies to tourist souvenirs. A recreation of an actual wall in the artist’s home, the piece works quite effectively as an artwork in its own right, and as a reflection of Vallance’s own free-wheeling gleaning instinct. Lisa Anne Auerbach also lets her own compulsions (and hobbies) drive her artistic practice: a devotee of politics, knitting, and bicycling, she weaves those elements together with a collection of charmingly campy knit hand-sweaters offering jokey one-liners or political slogans and mock-ups of bicycling magazines using herself as saucy cover girl. Victoria Reynolds crafts astounding portraits of meat—specifically reindeer meat and innards—which she lovingly depicts with startling realism and sets within ornate gilt frames. Aside from making a case for vegetarianism, these works also carry off-putting insinuations of sexuality, with their priapic dangling flaps and labial folds, blending eros, thanatos and cold cuts with savory aplomb.

The drawings of Charles Irvin channel sex, drugs and menace through a kinky cartoony lens: his depiction of an artist with a skull face and a penis and testicles for a nose, emitting cum-paint onto a palette while nude female fairies inject it with “hero juice” from a syringe, scores in vividness what it lacks in subtlety. (His video Membrane Lane invokes conspiracy fears, false memory syndrome, and kitten imagery). Julie Becker’s wispy mixed media works imply a sense of wonder that they do not fully express: her installation recreating a chunk of sidewalk outside her studio, complete with manhole cover, does not make her world seem an especially magical rabbit hole to escape into. Completing the visionary batting order, Hirsch Perlman’s stark, large-scale (roughly 6’ x 9’) B&W photographs of his tabby cat are surprisingly effective at turning something familiar into a mystical force of nature (which indeed cats are, as cat owners know). Whether blurred in motion or sitting in sphinx-like repose, Perlman’s Animus Cat evokes a sense of profound natural energy that is ever-shifting: at once corny and dangerous, prosaic and unknowable.

Of course these sort of artistic “alternate realities” are hardly new or unique to Los Angeles (just peer into Duchamp’s eerie, voyeuristic final work, created in secret over the last 20 years of his life, for proof). But Subotnick frames them nicely without forcing the point. If the show is less a treatise than a kind of peephole, well, a peephole is always more fun.

Dali and Me, 2006, Llyn Foulkes, Mixed media, 33' x 26'
Collection of Karen and Craig Krull / Photo: Courtesy of the Hammer Museum