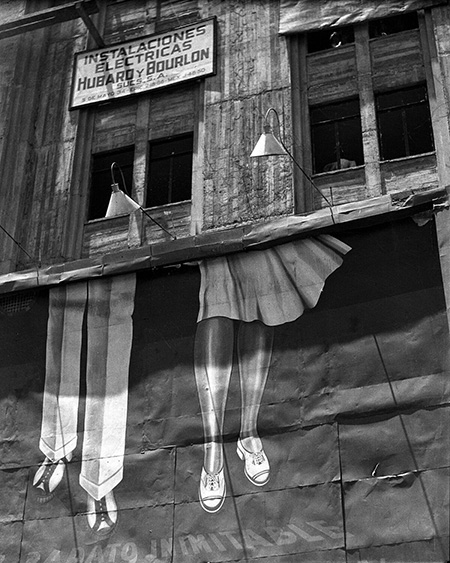 With the withering of categories like fine art photography (read vintage photos), it’s salutary to review one artist who spanned a century and came to define how photography became art in the first place. “Manuel Álvarez Bravo: Mexico’s Poet of Light” is far from the blockbuster shows the boy from Mexico City eventually enjoyed all over the world, but it is noteworthy both for newcomers to Bravo and to that vanishing group, photo specialists. Since his life spanned the whole century (1902-2002), Bravo underwent an extraordinary transformation and elevation from youthful urban eyewitness to the Mexican Revolution, to movie-industry still photographer, to intimate of Frida Kahlo and Diego Rivera, and on to favorite of giants like Octavio Paz, André Breton and Luis Buñuel: they all loved the guy and encouraged him to go out into the hinterlands and photograph “the people.” (Rivera, to influence him politically for the ruling party; Breton, to uncover the hidden sources of Surrealism).

The results are on view in one long gallery on First Hill; two dozen exquisite black-and-white silver gelatin prints, all of which were reprinted for the artist later in his life, between 1977 and 1981. Everything one loves about black-and-white photography (or film) is here: the strong contrasts, the deep shadows, the bold natural and artificial lighting; the manipulation of natural forms like leaves to construct enigmatic abstract compositions. Early Bravo is revered most of all by aficionados, almost because we can see him living Surrealism, or Mexican Muralism, rather than perpetuating both strains under prestigious American and French institutional encouragement, as was the case later in life.

The pantheon of 20th-century photography includes Bravo, but why? Wander around the gallery, inspect each print individually, and you will learn why. Regionalism is transcended into something universal, i.e., love, fear, sadness, boredom. Many of the gimmicks employed by U.S. photographers of the 1960s — window reflections, off-kilter viewpoint, vernacular subjects — were invented by Bravo. On top of that, his chronicling of the young Mexican republic managed against great odds to avoid, for the most part, political or social stereotypes. “Day of All Dead” (1932) is loaded with the irony of a beautiful, smiling girl cradling a sugar skull. “Two Pairs of Legs” (1930) foretells Lee Friedlander’s street photography. State censorship was real: “Portrait of the Eternal” (1935), one of Bravo’s most celebrated images, of embracing nude lovers, was summarily banned from the avant-garde art magazine for whose cover it had been commissioned.

Interestingly, on view here is perhaps the only portrait of Frida Kahlo with the artist making the portrait in the same frame with her. Astoundingly, in “Frida with Globe: Coyoacán, Mexico” (1940), Kahlo sits next to a ubiquitous Mexican, mirrored glass globe: Look closely and you can see Bravo and his tripod.

Fortunately for young Bravo, all the Euro-exiles and American photography communards, like Henri Cartier-Bresson, Walker Evans, Paul Strand and Edward Weston, showed up in Mexico City in the 1930s and 1940s.They couldn’t get enough of Bravo’s piquant, “anti-picturesque” peasants. Eventually, the Museum of Modern Art, New York, shared their enthusiasms and organized his first U.S. survey at the Pasadena Art Museum in 1971. Museum honors spread from Paris to Beijing, Madrid to Jerusalem, and back again to Los Angeles, where his Getty Museum survey of 2001 met with wide acclaim.

Bravo lived for another 31 years beyond the 1971 MOMA show. Prints from 1975, 1976 and 1977 testify to his evolving power, in his case, away from social documentation to the vocabulary of the city and countryside that conveyed more poetic, anti-heroic imagery. In “Two Women, a Large Blind, and Shadows” (1977), the brevity of the figures joins the symbolic presence of strong light and dark. “Reed and Television” (1976) juxtaposes a plant leaf with a TV antennae. Bravo’s power of poetic compression is supreme here. “First Act” (1975) sets one seated boy next to another who hides behind a curtain. At age 73, Bravo retained his sensitivity to young people, constantly on the threshold of hope despite their country’s persistent economic setbacks. It contrasts strongly with the 1934 “Man from Papantla,” an older boy in ragged white clothing, staring defiantly at the photographer.

In the end, Bravo’s unerringly reductive compositions undercut the potentially sappy or propagandistic subject matter — young Mexico in a politically embattled era — and guarantee that they transcend their original topicality. The best example is “Lengthened Light” (1944), without figures, which sums up the dazzling sunlight and shadows of Mexico. More importantly, the image points out how his photography shapes and affects our vision of the world with a prevailing poetry based on individual talent and technical mastery.