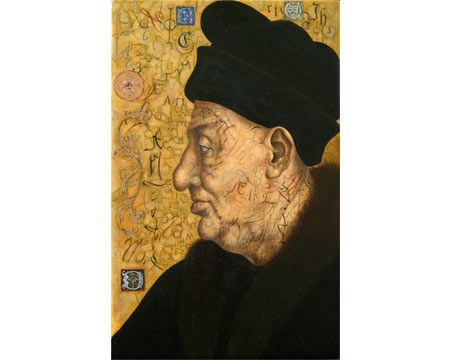 Enchanting, strange and impeccably painted, the series of new oil paintings by Bay Area artist Lucy Gaylord-Lindholm are wonderfully enticing, presenting a multi-layered universe that continues to unfold. The thirteen detailed works that comprise the exhibition are small, ranging in size from 17.5-by-13 inches to 11.5-by-9 inches. They are designed to create an intimate viewing experience.

A romantic evening landscape is intruded on by an enormous structure, or perhaps it is a creature made of haphazardly arranged pieces of lumber and fronted by the head of what appears to be a bird. Finely rendered portraits morph into a tangle of string. Gaylord-Lindholm’s paintings have a classic, centuries-old feel, drawing on traditional subjects and the genres of landscape, still life, portraiture, and the figure, with a heavy dose of surrealism.

In “Three Graces” the famous mythological trio is depicted nude and voluptuous in its traditional grouping. The middle figure faces away while the other two have their faces exposed to the viewer; here, however, the nudes are variously covered in larger-than-life Band-Aids - the adhesive strips appear on multiple occasions in this body of work. And, unlike most portrayals where the women interact only with each other, here the figure on the left, Aglaea, goddess of beauty, stares brazenly at the viewer, referencing the once-upon-a-time controversial frankness of Édouard Manet’s “Olympia.”

Gaylord-Lindholm draws ideas and imagery primarily from art history, pop culture, science, and fairy tales. “I’ve always been interested in the quirky or absurd,” the artist says in a recent interview, “portraying the impossible in a way that almost could be plausible.” From show to show, painting to painting, the imagery varies widely, but throughout, the palette is rich, the work tight and dramatic. And there is a commonly depicted idea: change, juxtaposing reality and the further reaches of our imagination, often drawing from a place of fear - disintegration of self, insanity, claustrophobia.

“Untitled #2” is a portrait of a young girl, face forward, who stares into the middle ground, out toward us, but not at us. Her hair is dark brown and tied back, giving her a plain look; her clothing, which we see from the waist up, is a dark grey. She is against a solid darkish brown-green background. Below her neckline we can partially see through her to what’s beneath her skin: a small shadowy horse, mechanics, perhaps a spaceship. There is movement indicated toward the bottom and flowing to the right, as if a celestial storm is beginning to blow through her and will eventually fully expose her bizarre inner workings.

While these works are haunting, they are so gorgeously rendered and delightfully intricate, they play out like a dark comedy. And though completely odd, they have an internal logic that makes its own kind of sense; these paintings aren’t arbitrary. They approach the edge of absurdity without crossing over. We come away smiling and a bit more comfortable with the world’s uncertainty.