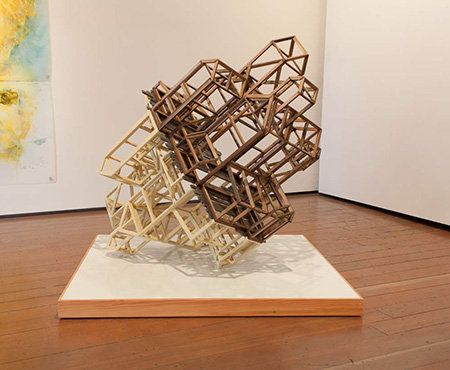 Cris Bruch’s current survey follows an exhibition at the Frye Art Museum in Seattle that featured 18 large-scale sculptures underwritten by the Museum. Ironically, the gallery show operates more as a museum retrospective, while the earlier show would have been more at home in a gallery setting. Covering a 10-year period, “Dispatch” offers a welcome opportunity to revisit the impressive diversity of materials, imagery, and evolution of the 59-year-old sculptor and video graduate of the University of Wisconsin, Madison.

Beginning with a ceramics background at University of Kansas, Bruch has focused sporadically on art in public places with key commissions in Oregon and Washington. These, in turn, influenced the scale and biomorphic, organically abstract look of the studio pieces, eight of which are seen here for the first time.

Among the older works, the stacked-and-laminated mahogany strips in “Cleave” and “Vale” (both 2006) cling to a wall like rowboats or kayaks stored upright for winter in a boathouse. A beautiful brick-red outline defines the rim of “Vale.” Bruch’s use of color is rarely commented upon, but as the five new paintings suggest, this is an area of great flair and one worth pursuing further.

“Weathermap” (2012) is comprised of 28 gridded ink-on-Mylar panels making up a huge rectangle (12 by 21 feet) pinned to the wall. All sorts of colored pools, invasive blobs and overlapping clouds use yellow, blue, purple, gray and pink to great effect. Climate change and its inescapability that is referenced here lends the work underlying meaning. Similarly, the four smaller “Roots” ink paintings (all 2012) also delineate unseen natural phenomena that sometimes seem afflicted, contorted or degraded, again alluding to ecological crises. Meandering root patterns are clearest in “Roots #4” with its somber browns and blues, while “#2,” “#3,” and “#6” are more abstracted, suggestive of maritime settings such as tidal pools.

“Rube” and “Blind” (both 2010) were first seen in a German art museum show in 2012, where they echoed the work of British sculptor Tony Cragg, who has taught in Wuppertal for many years. Shrouded in nailed wood lath, “Blind” resembles a tall, threatening figure in a full body Islamic chador. Considering Germany’s immigrant population, this, too, conveys wide social references. “Rube” is a vaguely figurative, painted-and-sanded epoxy-over-Fiberglas shape perched atop a four-legged bronze stand. Both works affirm the mystery of forms that Bruch is constantly able to instill in such heavily materialized objects.

“Cash Crop Rotation” (2016) grew out of another German piece, “Mirage,” a huge wooden lattice work resembling Midwest grain elevators and, in its newer, smaller version, tilted with its bottom half drenched in ground corn. This marks an apogee of overlapping meanings as well as material handling: cutting, gluing and balancing.

“Harrow,” “Helve,” “Jack” (all 2015), “Trammel,” and “Runnel” (both 2016) round out the grouping as updated, wall-mounted works that, unlike “Cleave” and “Vale,” reduce mass and volume to line and void. The first three allude to antique farm implements lovingly created from strands of ironwood with intricate inlays and dovetailing of yellow cedar. The latter two call to mind streamline feed troughs or barn gutters that gracefully suggest rustic or agrarian origins long since refined out of existence, but never entirely, by Bruch’s masterful fusion of memory, place and shape.