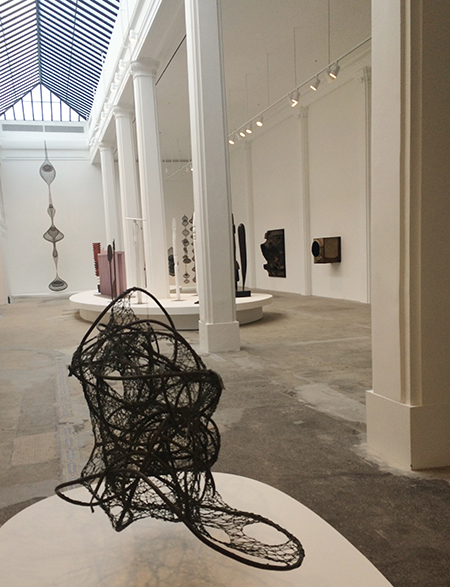 The new kid on this block quite literally occupies the block in its entirety in the downtown Arts District. It is fair to say that Hauser Wirth & Schimmel is actually an unprecedented fusion between a gallery and a museum in its size and the scope of its programming. It blends the commercial and the educational in a number of galleries, a bookstore, cafe, even a garden; so it is fitting that the theme of the massive debut exhibition embraces more than a half century and unfolds expansively. Paul Schimmel, the chief curator at MOCA, who for 22 years brought many innovative exhibitions there, joins UC Santa Barbara professor Jenni Sorkin to mount a remarkable grouping of women sculptors in "Revolution in the Making: Abstract Sculpture by Women, 1947-2016."

The key here is in the multiple meanings of the word “Making,” as in a revolution that is continuing even now (70 years later and still counting), as well as a revolution in the construction and actual choice of materials that were used. While the aesthetics of Abstract-Expressionism held sway in both paint and sculpture through the fifties, Ruth Asawa was creating delicate, elegant and craft-referencing wire structures, a selection of which hang in the west end of the front gallery. Along with Louise Bourgeois, Lee Bonteceau, Claire Falkenstein and Louise Nevelson (underrepresented in this context), these five artists fill out this first space to form the historical foundation of what is to come over the following decades and in the remaining bulk of the exhibition.

Bourgeois' quirky, irregular totemic painted wood sculptures, unlike Asawa’s floating forms, are bound to the floor by gravity and in their stubborn stance reference the body. Falkenstein’s selection of metal sheet and wire networks initially feel like ancient creatures, glass jewels embedded within like beating hearts, recovered from an archeological site and encased in spider webs or a cocoon. As you spend time with them the staccato gestural marks in space, the connection between painted gestural expression and its sculptural potential becomes clear. A parade along one wall of Bontecou's powerfully mysterious soot-smeared, canvas-covered, welded steel sculptures pack a deliciously vicious wallop that escalates as you move from one work to the next. These evolve from a 1959 box-like structure with a gaping black abyss to light-filled 1966 horizontal pieces that bear a surprising resemblance to Inuit totem poles. The only disappointment in this first soaring, spectacular room was the single Nevelson black construction that ends up feeling like an abandoned piece of furniture.

By 1968 Eva Hesse was using the strategies of repetition that are a hallmark of mainstream minimalism, and yet creating wonderfully evocative work that is the very antithesis of the cool, unemotional, and rigid minimalism championed at the time by the male art world. In “Aught,” four rectangular latex-over-canvas “paintings” stuffed with “unidentified” materials hang next to each other like sheets hanging out to dry. Their lumpy surface, much like that of an unmade bed, suggests the domestic sphere, though hardly in its warmth or intimacy. In “Augment,” the latex-over-canvas pieces are layered on the floor to create a rug–like surface. Paradoxically, however, it's too delicate to actually step on.

Magdalena Abakanowicz' “Wheel with Rope” (1973), literally snakes through several galleries. Her usage of industrial materials like wood, burlap, hemp and metal line to create dramatic, exceptionally large-scale works not only command attention but place us uncomfortably within the physical work. Also emerging during the 1970s was Jackie Windsor, represented here with two large-scale works using trees and hemp bound together into dense form by her labor-intensive and obsessive technique. These works suggest a body image (particularly the two bound logs placed next to each other) as well as women’s work, such as darning. Similarly, Abakanowicz' “Wheel with Rope” can be seen as a monumental spool of thread.

One of the joys in this exhibition was its international scope and thus the inclusion of artists not readily familiar to a Los Angeles audience, but who bear relevance to the theme of the exhibition and broaden its aesthetic reach. Cristina Iglesias' “Untitled” (1993-7) at first appears to be a derivative concrete version of Richard Serra’s curved metal walls. But, as one moves around it to the left, it surprisingly peels away from the wall to display a tapestry snug against the concrete wall, highlighted in the aluminum affixed to the wall. Surprising use of unexpected materials and unusual juxtapositions play with our expectations, forcing a fresh aesthetic response.

The many elegant and restrained white gallery spaces eventually lead to the dark, wooded space called appropriately “The Barn,” in which many of the most contemporary works are housed. Unfortunately, this room contained work that was fragmented, colorful and espoused a “more is more” aesthetic that had each work fighting for attention. The works here might have been served better by being interspersed with earlier work from which it had connections, as the Brooklyn Museum has been doing with its non-chronological exhibitions. This was especially true of Kaari Upson’s “Left Brace Erase, Back Brace Face," an updated, more humorous version of Bontecou’s work. Even without such connections being integrated into the flow of the exhibition, “Revolution in the Making" describes an important journey of female artists’ struggle to be considered on equal terms with male counterparts. In doing so they display unapologetically assertive aesthetic thinking and a commitment to material and scale that is fearless. May the revolution continue.