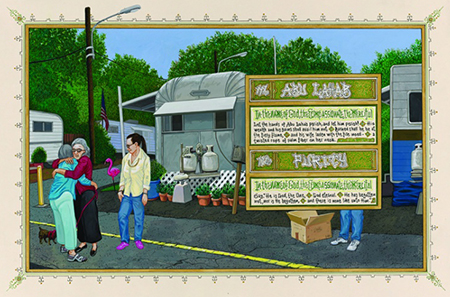 Much has already been written about Sandow Birk’s "American Qur’an,” but in the wake of the terrorist attacks in Paris and San Bernardino the rising tide of fear and hostility aimed at Muslims domestically makes his artworks' resonance even sharper.
"American Qur’an" is a formidable project. It’s both an act of social investigation into Islam’s most sacred book and a visual meditation on how its ancient words and meanings reverberate in the contemporary landscape of American society. Begun as an effort to understand the content of a text increasingly debated in America for its true meaning, the artist began hand inscribing and illuminating a translation of all 114 chapters of the book. The Museum has managed to assemble almost the entire project from a number of private collections. What this collection gives us is not only the intimidating scale of an art project that took the artist 9 years to complete, but a clearer look at the his earnest and sometimes poignant layering of words and images.

Typically Birk’s prints, drawings and paintings have dealt with the roiling complexity of contemporary life. His detailed, beautifully drawn images often offer insight into the paradoxes and fraught territory that lies between humanity’s most noble aspirations — often codified by its most important documents, and the hard realities of life.

This project, the artist says, “considers the Qur’an as it was intended — as a universal message to humankind” intended for use as a book of guidance. What that message and guidance might mean as Islam’s written words rub against the daily traditions, lifestyles and mindsets of contemporary American life is what this project reflects upon.

Birk does that by superimposing big blocks of dense, stylized text over vivid paintings of sights from unremarkable present day American neighborhoods, workplaces and news footage. While the format is based on the tradition of colorful Persian miniatures, it also feels reminiscent of illustrations in medieval Bibles and manuscripts. Often the text-block almost completely blots out the image. It’s a focus on word over image that forces us to literally look behind the long run-on passages, all written in a tight stylized script loosely based on LA street graffiti.

Sometimes the juxtapositions of text and image offer oblique commentary on a cultural amalgamation. That’s what happens when we are offered a truncated glimpse of devout Muslims praying on carpets out on a sidewalk beside a cart with I-heart-NY t-shirts for sale. We can see only their bent bodies. They could be anybody and any nationality. But two structures of faith are surely bumping up against each other on the pavement — one is religious, another economic.

Most of the images the artist uses function as metaphors, such as the section titled "The Prophets," which links a scene of an exploratory scuba diver to a rambling text about the watery birth of all creation. That’s a lot to wade into. However, even when we don’t take time to parse the text we still see the holy words boldly superimposed over familiar scenes like a man changing a flat tire, tourists visiting Old Faithful, a hospital delivery room or US soldiers patrolling in the war torn Middle East. That very positioning challenges us to look for everyday connections the way a devout reader might, or at least to acknowledge that the artist is weaving an entirely American stream of consciousness out of the book’s metaphors.

Historically, ancient inspirational words accompanied by illuminations that pictured the architecture and people of the artist’s own time added a sense of updated reality to the text’s meaning. Given the growing violence committed by terrorists who claim religion as their rationale, Birk’s long stream of everyday US scenes on these pages are becoming increasingly layered with an air of contemporary anxiety, as well as nostalgia and loss. Just like America.