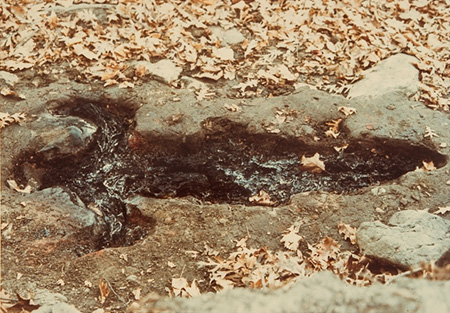 I recently interviewed feminist poet Margaret Randall about her friend Elaine de Kooning, the Abstract Expressionist painter and wife of Willem de Kooning. "She didn’t want to be called a woman painter, at the very beginning, in ’69 and ’70 when feminism became part of our discourse,” Randall said. “I don’t think she believed it would be to her advantage to engage in those polemics.”

De Kooning's work does not appear in “Looking Forward Looking Back”, an exhibition of women artists, but her opinions on such matters resurface as I view it. Is there a strong enough narrative here to justify grouping these women together? Shows like this risk replicating the barriers that have kept women artists separated from their male counterparts, rather than exposing or subverting them.

The concurrent exhibition “O'Keeffe In Process” is a strong lead-in to “Looking Forward Looking Back.” It deftly chronicles Georgia O'Keeffe's artistic evolution, from her teen years painting traditional portraits to an iconic late-career cloud canvas. Wandering from the O'Keeffe galleries into a broader survey of historic and contemporary women artists feels like slipping from a tributary into a churning river delta. Here are seminal statements from women artists spanning the 20th century, with contemporary offerings that spiral in intriguing new directions.

Nimble surrealist drawings from the 1920’s by “Mama of Dada” Beatrice Wood occupy the far end of the show’s timeline. A late 1960’s drawing by Eva Hesse and postcards from Eleanor Antin’s monumental 1970’s mail art piece "100 Boots" yank me far away from modernism and towards the fragmented 21st Century. Ana Mendieta’s "Silueta Series" of photographs from the 1970’s and 80’s are the show’s most spine-tingling works. Earthy imprints of Mendieta’s body remind us of her profound contributions to land art, and inevitably, of her suspicious fall from a New York high rise.

Punchy installations by contemporary artists Angela Ellsworth and Ligia Bouton occupy swaths of floor space, playing to the voracious contemporary taste for artworks that are dramatic actors, à la Michael Fried’s “Art and Objecthood.” A handful of other mid-career contemporary artists bring the story to our pluralistic present. It's hard to say whether these artists will land in the history books or vanish into our meta-modern sprawl, but that's part of what makes their stabs at brilliance so exciting.

What would Elaine de Kooning, who was also a great art critic, think of this scrappy exhibition? I have a hunch that, like me, she’d wish the museum’s walls could fan out like accordions. “Looking Forward, Looking Back” examines so many influential artists, but they often seem remote from their larger contexts. Use this show as a crossroads, with each piece representing an important (and often woefully under-examined) path through art history. Many of these women deserve a show akin to “O’Keeffe in Process”, and some have gotten one.