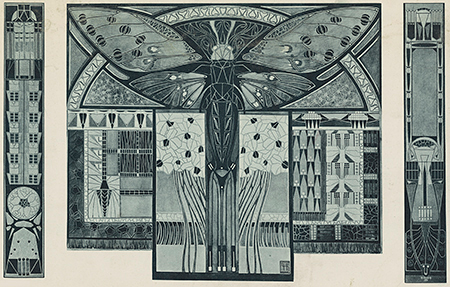 Charged with always exhibiting parts of the Frye Art Museum founding collection, Director Jo-Anne Birnie Danzker has found numerous illuminating scholarly ways to juxtapose the unusual works of German Romantic and Wilhelmine art with other borrowed or acquired items from the same era, 1860-1914.

The current display tries to set paintings by fin de siècle German, Austrian and American artists such as Franz von Stuck, Hugo von Habermann and John Sloan against a backdrop of Art Nouveau, Jugendstil and Secessionist decorative art objects from the private collection of architectural preservationist and historian Lawrence Kreisman and his partner-connoisseur Wayne Dodge.

Leave it to Birnie Danzker, with her background as Director of the Villa Stuck in Munich, a Secessionist mecca, to uncover such an obscure collection of underappreciated art, furniture, jewelry and books in Seattle. Kreisman, author of the definitive study of Pacific Northwest Arts and Crafts architecture, and Dodge have spent years assembling the treasures of an offbeat, overlooked era. It meshes perfectly with the darkened tones and exotic subjects in the Frye paintings.

“1900” proves what a transitional period 1880-1914 was. Not yet fully modern, much of the work is complicated, ornate and linear. The all-inclusive aesthetic of designing every aspect of a project came out of composer Richard Wagner’s “Gesamtkunstwerk” or “Great United Artwork” theory, illustrated in his “Ring” cycle of operas, but also in a few of the difficult-to-see, roped-off domestic vignettes arranged. Styles percolated between furniture, glassware, tableware, textiles, rugs, wallcoverings and cutlery as well as clothing, book design and architecture. Olbrich’s designs for the Darmstadt artists’ colony in Germany demanded full interior designs for each room, some of which are seen in vintage photographs. Examples of place settings with matching plates, cups, placemats, napkins, silverware and goblets are displayed as micro-“Gesamtkunstwerk.” No wonder the tide turned even before the Great War, with Vienna architect Adolf Loos equating ornament with crime and French heavyweight Le Corbusier dismissing decoration and ornament — so brilliantly executed in “1900” — as worthy only of embroidery classes in convent schools.

More than a century later, the transition from Art Nouveau to modern art and design looks much more fluid and gradual, less revolutionary. Geometric motifs appear on 1905 Syracuse china and 1904 Rosenthal salad plates. Beyond that, some of the designs, like Olbrich’s “Blue House” (1901-04), are so eclectic in their sources that they prefigure the pluralistic, late 20th-century postmodern movement, doubly ahead of the curve in this case.

Dodge has also collected bronze medals, which were quite popular during the period, many of which are on view. These bridge realism and stylized abstraction too, looking back and forward at the same time, the way one can imagine everyone at that time did — or thought about doing.

Architects, furniture makers and collectors, jewelers, weavers and textile enthusiasts will appreciate the amount of detail and unfamiliar material. Big names such as those art history students see in books all the time — Hoffmann, Majorelle, Olbrich, Koloman Moser, and Peter Behrens — are represented by minor, but fascinating, examples. Conversely, there is the surprise of discovering largely unknown figures like Scottish designer Archibald Knox, Birmingham silversmith W. H. Haseler, and George Elwood. Elwood's two mahogany dining room chairs with inlaid-wood tulips (1903) typify the simultaneous nod to nature and a glimpse of the stripped-down style of a future that was soon to arrive and shatter the world that created these quiet, elegant possessions.