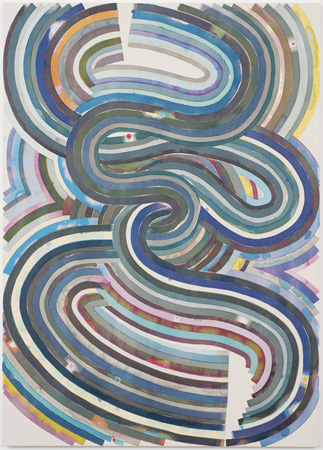 Maneuvering a graceful balance between precision and experimentation, the thoughtful, visually appealing canvases of Hadley Holliday are informed by a spectrum of historical precedents, but address them very much on her own terms, with far more sincerity than cynicism. Like Mark Grotjahn, the Los Angeles (Blum and Poe) -based painter who over the past half decade has glided to visible project room shows at the Hammer and the Whitney on the wings of color-chart butterflies and pinwheels, Holliday employs a conscribed formal and conceptual vocabulary to engage abstraction at its roots. In this, her first solo show, the 2004 Cal Arts MFA graduate seems to be striking out in multiple directions and for the most part hitting her mark.

Holliday’s process for applying paint might be described as dressing up the free-flowing fluidity of, say, Morris Louis in one of Frank Stella’s pin-striped suits, with a playful tie-dyed tee shirt of her own creation. Her works derive from a set of simple propositions, whether it’s an attempt to pour a square, or to use a set of arcs to fill the rectangular space of the canvas. Her acrylic compositions propose loose geometries, only to undermine (or enhance?) them through various imperfections, such as drips and bleeds and other bits of deliberate inexactitude. As a result, the works constantly seem to be setting up authoritative strictures and structures, and then gently subverting them. Unsurprisingly, perhaps, the most successful works in the show were those in which the contrast between this formality and informality are most dynamic. In Collide-o-scope and Sky Window, Holliday posits nearly square 60 x 66 inch canvases which she divides into blocky, striped quadrants: the colors waver somewhere between psychedelic and pastel shades, with pale yellows and lavenders jostling up against fading blacks. The effect is at once a riotous jumble and oddly relaxed.

In several works, Holliday loosely piles up rainbows like a trayful of pancakes. In her best three works, she sets out looping, multi-colored stripes that curl and coil against each other. Forever and Never, at 70 x 50 inches, features two ovoid bundles of colored bands, each with slices of empty canvas where the stripes end, and looping together at their midriff to form another inexact curl; one gleefully enters the colorful mazelike composition that results to revel in its pleasurable, rigorous spontaneity.