John Baldessari, 'A Print Retrospective'
from the collection of Jordan D. Schnitzer and his Family Foundation at the Legion of Honor Museum
Review by Mark Van Proyen 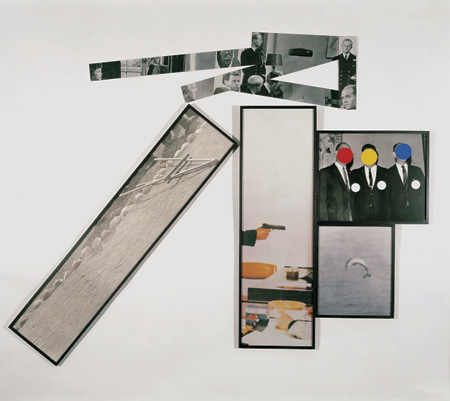 John Baldessari’s 1987 work entitled The Fallen Easel is made up of nine framed panels containing fragmentary images that seem to add up as a complex non sequitur. The lone diagonal panel shows a grayscale screen print of an easel laying on the ground, while other panels show faces and hands that are sometimes obscured by ovals of bright flat colors. Clearly, we see a rebus of sorts, but its substitution of picture-fragments for a syllogistic circuit remains just outside of the grasp of routine readability. Mentally reassembling them does not help, and the narrative context that would enable the work to be analyzed in the manner of a dream is missing. We can only conclude that the relationship between the work’s diverse elements is one of an evocative and visually stylish provisionality, but we remain haunted by it, for it keeps us coming back in search of the key that will unlock its beguiling mystery of allegorical displacements and substitutions. Yes, this is an update of a kind of surrealism, but there is something else going on here as well, something pertaining to the typical psychological distance created by mass media imagery striped of its pretense of narrative coherence. All at once, the linked histories of Surrealism, Pop Art, Conceptual Art and Postmodernism flash before our eyes. We are not in Kansas anymore, but is unclear exactly where we are or where anything else is for that matter.

Because many of John Baldessari’s graphic works exist as multi-panel compositions, it is hard to put forward the exact number that is included in this impressive survey of the artist’s prints from the Portland, Oregon-based collection of Jordan D. Schnitzer (on view through November 8 at the Legion of Honor). Suffice to say that the exhibition contains over a hundred works executed in almost every conceivable graphic medium, most featuring multi-generational combinations of several such techniques. These are organized into eight chronological groupings that focus on specific materials, subjects and themes that are usually clustered in relation to the graphic arts shop or publisher that Baldessari collaborated with at the time of their making. The earliest work in the exhibition is a lithograph that was printed by Nova Scotia College of Art and Design Lithography Workshop in 1971. It is titled, I Will Not Make Any More Boring Art, and it features about a dozen handwritten iterations of that phrase to make a witty remark about the relation of interest and drudgery, a subject with which every artist is familiar. Although this work seems related to the word paintings that the artist executed during the mid-1960s, it seems a bit out of place of in this exhibition because the large bulk of Baldessari’s graphic output really begins in earnest in the mid-1980s, when he abandoned the use of text in favor of appropriating image fragments deployed as if they were a kind of hieroglyphic stand-in for … text. For example, in the prints from the 1986 series titled Hegel’s Cellar (published by Multiples Inc. in New York), we see the earliest example of his deft mixing of images derived from cinematic sources, recast as iconic cultural signifiers that are once familiar and mysterious.

The 1990s were a productive decade for Baldessari’s graphics projects, and in several series he worked with three-dimensional attributes added to two-dimensional works, or vice versa: witness the 1994 series of multiple objects titled Table Lamp and its Own Shadow (printed at Mixografia® in Los Angeles). He also made a few forays into digital printmaking, for example, working at Muse X Editions in 1996 to produce the ten-part Iris print titled Pot with Nine Removals, a comic work that features a man in a pith helmet sitting in a cook pot surrounded by women wearing grass skirts (one of these disappears in each successive image).

This exhibition sets up some interesting points of reflection, not the least of which is its revelation of the possibility that a postmodern artistic practice can very easily reverse the modern notion of printmaking being the low-cost epiphenomena to making singularly expense paintings. In other words, Baldessari’s graphic practice suggests that painting can be seen as being somehow epiphenomenal to an energetic and innovative printmaking practice. Another point worth pondering is the relation of these works to the general artistic ferment that took place at the California Institute of the Arts, where Baldessari taught from 1970 to 1988. A careful look shows that much of his 1980s graphic output owes something to the way that David Salle (his most famous student) organized images and space in his early 1980s paintings, but the real view must take into account how the work of both artists reveals the influence of another CalArts faculty member, that being filmmaker Patrick O’Neill. Indeed there is much that could be said about this exhibition, and it is unfortunate that the museum went to the trouble of assembling this major body of work without developing the kind of in-depth companion catalog that it deserves, especially in this year when Baldessari (along with Yoko Ono) received the prestigious Golden Lion at last summer’s Venice Biennial.