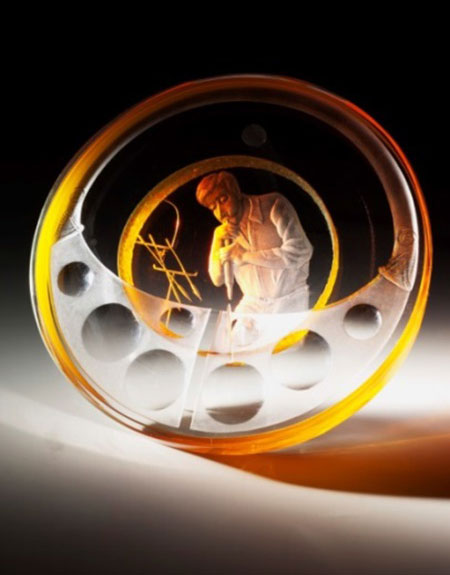 As if Ireland hadn’t enough problems already, the collapse of the glass and crystal manufacturing business in the early 2000's was a critical blow to culture and the Irish economy. Celebrated since their origins in the 18th century, famous factories in Cavan, Galway and Tyrone closed before Waterford Crystal shut down its original facility in 2009.

Museum of Glass Director Susan Warner encouraged curator Roisin de Buitlear, a former professor at the National College of Art and Design, Dublin, who selected three laid-off Waterford workers — Fred Curtis, Eamonn Hartley and Greg Sullivan — to cut and engrave glass pieces she made in Tacoma. (The Museum of Glass has its own hot-glass workshop, which attracts 135,000 visitors per year.)

The results, 25 collaborations and two works by de Buitlear alone, are an impressive riposte to the death knells for Irish glass. Even though Ireland still has no art glass gallery or clutch of glass collectors (thought to be necessary for market success and media recognition), the Irish government has helped arrange shows in Beijing and Shanghai galleries as well as one in Tacoma besides the museum. Nor are there yet the numbers of younger artists replacing the now redundant blowers, cutters and engravers, despite two or three academically affiliated programs.

Until the scene fully matures, a clear profile of one aspect of the emerging contemporary Irish glass scene — engraving and cutting — is revealed here as unusually strong, creative and promising, if not technically innovative or original. As with the poetry of W. B. Yeats, here too archaeology and mythology provide source material for imagery and narratives.

With Fred Curtis, blown-glass bells made by de Buitlear have inclusions of effigies of St. Patrick and a snake. Apparently, the legend of the saint's expulsion of reptiles is a foreign concoction. In Irish lore he banished demons by throwing his bell at them. The deep amber color is worlds away from traditional clear lead crystal. More sculptural yet no less historically referential, Curtis’ “Sword: Steed” and “Sword: Lochlann” (all works are 2010/2013) recall the 8th-century Viking raids on monasteries. With their occupation of the island, the Vikings opened up Ireland to trade as distant as Byzantium and Central Asia. The precedents for internationalizing influences are therefore very old. Using techniques of lightly chipping and cutting, the swords resemble originals in the National Museum, Dublin. Other works by Curtis include two shields called “Drones” that emulate imaginary Celtic battle aids, decorated with the interlocking diamond pattern common to Waterford styles.

Eamonn Hartley’s interventions through engraving are more figurative, including self-portraits in “Riding the Wheel” and “Production,” the latter overlaying an 8th-century metal brooch design onto a view of a factory blower. In the former, a more intricate Celtic design frames the artist on a bicycle receding into the distance. The most personal work on view, it also best balances ancient historical imagery with contemporary themes. Another Hartley collaboration, “Song of the Wheel,” juxtaposes an engraved torq (or neckpiece) over a profile of the bespectacled artist examining an engraved Waterford vase. Memorializing the past as well as celebrating it, this is a work that encapsulates the whole “tradition in transition” with all the pathos associated with the dismissal of skilled glass factory workers when the factories were closed down.

Most narrative and figurative of all, the Greg Sullivan collaborations are also closest to iconic clear cut-and-engraved Waterford examples of presentation or commemoration commissions. Yet miraculously, Sullivan has been able to shift to autobiographical content. “Show Me the Ropes” is a clear cast-glass slab with three rock climbers attached by ropes. The perils of nature — or learning any complicated skill — are invoked. “Handover,” depicting the day the artist’s uncle took possession of a tractor, symbolizes another fateful technology transfer, that of manual labor to mechanized. The variety, complexity and precarious relief-carving of the village scene is astounding.

Most complex of all and deeply fraught with historical meaning, “The Glass” refers to the Waterford factory itself, represented along with dozens of departing workers as ghost buildings. Seven other glass factories, each meticulously rendered, are identifiable, all connected by a curling Celtic letter that, in turn, acts as a unifying river. Here and in three “Soft Rain” emerald-green spheres, Sullivan bids adieu to the blue-collar heritage of Irish glass, resisting nostalgia and pointing toward the future. “You Have a Coat” shows the artist walking his dog, both embedded in semi-corrugated blown-glass. We are gazing into the crystal ball of Irish glass, catching a glimpse of a future with greater freedom and less certainty. Not that different from other artists all over the world.