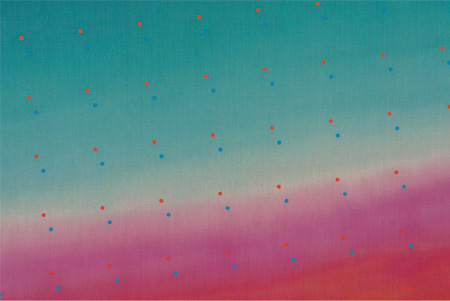 Tony de los Reyes "Border Theory" is a series of deftly painted abstract works, each depicting a clearly drawn border between the U.S. and Mexico. A comprehensive viewing reveals a deeper, conceptual expression in the pieces, with each one depicting a political/social viewpoint. De los Reyes, a lifelong Angelino of partly Mexican descent, created these 15 paintings from a deeply personal perspective, from his lifelong awareness of the border and its effect on his ancestors’ lives. Citing the 1848 “Treaty” ending the Mexican-American War, establishing a 3,169 km line, the artist acknowledges — and depicts in his works and their titles — the border’s political, cultural, economic, and aesthetic aspects.

Having worked in other styles, media, and concepts, in this series he employs poured fabric dyes for the body of the works and oil paint for the borderlines and minimal features such as dots. The dots, interspersed in several works, convey connections among seemingly disparate people and the coming together of diversity. The execution of these paintings, begun by pouring various richly colored  dyes onto unprimed vertical linen or paper, produce inventive pieces that could loosely be described as “color field” that are inspired by Mark Rothko’s paintings.

De los Reyes’ planning for each work is more deliberate than a cursory viewing reveals. It indicates his intention to create pieces that are simultaneously inspired by traditional mapmaking and are also artful. He says that the paintings “fuse politics, history and painting.” This intentional and painterly symbiosis results in pieces that are both visually vibrant and thoughtful. De los Reyes' tools include a several yards long hard metal mock-up of the Mexican American border that was derived from Google Earth’s satellite photography. He lays the bare canvas across the entire template (in two paintings) and selected parts (in others). He then pours the dyes down each side of the canvas. In some works, he uses the same color paints on both sides; in others, the hues on each side contrast.

The title of each work starts with the words, “Border Theory” and is followed by a description, Spanish in some cases, English in others. While the theme throughout is consistent, the stylistic range varies. In “Border Theory (ambient crossing/vinculo ambiental),” depicting the entire border, de los Reyes combines blues on the top of the border that complement reds on the bottom, then intersperses blue and red dots throughout to indicate the sameness of people on both sides. “Ambient crossing/ambient bond” is composed of contrasting multicolored swaths on both sides. A vertical depiction of the Rio Grande river/border, “Border Theory (illuminated river/flujo libre),” has a dark blue-black painterly field to the right and a lighter grayish field with darker dots on the left.

“Border Theory (desolate corner/el espacio antes y despues de la memoria)” is a pastel piece of light blues, pinks and greens, with the border on the right side and barely visible. A smaller work, “Border Theory (slumber/silencio provisional)” is composed of autumn colors of muted greens and oranges. “Border Theory (first compression/penumbra),” one of the largest works, encompasses the entire vertical border in the center, and striated blues and greens throughout. As the most “modern” piece of this group and the one most evocative of Rothko’s works, it simultaneously speaks to the viewer in multiple aesthetic and political languages, demonstrating that de los Reyes approaches his work with a mindful, explorative and adventurous spirit.