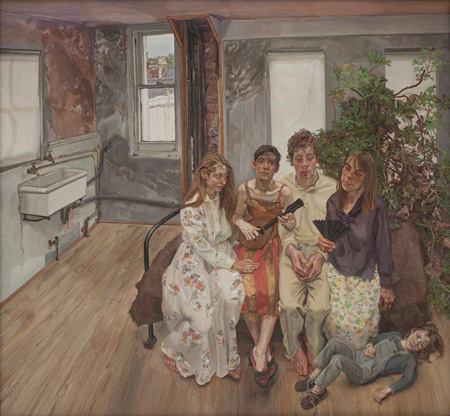 Lucian Freud’s palette is reminiscent of shrubbery past its prime, wet tea bags and clotted cream decanted three days past. The occasional use of claret or royal blue operates like a lifeguard’s whistle. Thus, our eyes gravitate toward a bit of tapestry, a tie or a medal-laden uniform. Freud’s reds and blues offer a tangential reprieve from this densest of worlds, constellated by torpor and angst. His props are striped mattresses, piled rags and furniture fit for thrift sales. Yet it’s impossible to look away. Just as we can't help but stare at people gone nuts and agitated curbside, we surmise that marinating in his work will offer up whatever epiphanies emerge from dark stars and wrecked worlds. (We long for epiphanies.) Freud’s brushmarks outline a mental vortex terribly well. Thus, his sitters are locked and loaded. They seem incapable of voluble congress or lyric inspiration — and there’s truth in that.

Freud’s murky colors and dirty whites eerily record numbness. As we live and breathe, surely we’ve all been there, peering into an abyss. He merely rubs our faces in it. His nudes are the antithesis of sexy. They’re exercises in seemingly squamous flesh and many look cadaverous. Penises are flaccid and so, too, is everything else. “Girl with a White Dog” is tragically vacant. Her bare breast evokes less excitement than cold crêpes. Even her dog is luxuriating in damp wonder. The dingy, striped sofa and gray curtain serve as the polar opposite of Ingre’s “Grand Odalisque,” drenched in luxurious golds and blues. However, to compare worlds is pointless. Freud gives us a plumb line into the psychological undertow of defeat so deep it becomes thrilling. Why be swaddled in riches when you can cosset yourself in clingy mental viscosity? The latter suits our times more evenly and without distraction. If we’re going to look, dammit, let’s look. After all, this is where everything has been heading for centuries. Freud, like his grandfather (Sigmund) before him, gives us our heads on a plate. Only cowardly ingrates would fail to claim his hard-won spoils and marvel at them. Much like Hamlet caressing a skull, Freud’s portraits are dear because it’s part of what we truly know.

While he claimed to disavow any interest in psychotherapy, the portraitist’s first question to sitters was, “So, tell me about your childhood.” There’s a dark brand of humor in that. However, he also famously admitted to being incapable of spending time with people he didn’t like: “All I know about love is that you’d rather have a miserable time with someone you love than a nice time with someone you don’t care about.” Given the length of time he spent making canvases, he must have cared deeply for his subjects. What can that mean, though, given works such as “Large Interior, W11 (after Watteau)”? It hurts us like a tragic joke about amputees. The Watteau allusion is so caustic that it’s flinch inducing. After all, Antoine Watteau is famous for his bucolic and idyllic works — or fêtes galantes, as they were referenced. However, instead of broad, colorful skirts splayed against a leafy, sun-drenched landscape, Freud delivers a tenement portrait so dramatically morose that, by contrast, it makes viewers want to either laugh or wail. It’s gray and ghastly. A forlorn young man in a striped dress placidly strums a lute in a world gone mute. The gentleman to his left is without affect and the next ghastly revelation is a woman with a black fan. The latter operates as a kind of parody of the comedies that fascinated Watteau. Add to that a dreary sink and bleak casement view and you have (ta dah!) a worldview. Isn’t it something?

It drives home what we all know. We lack verticality. That’s the truth. And Freud gives it to us — but good.