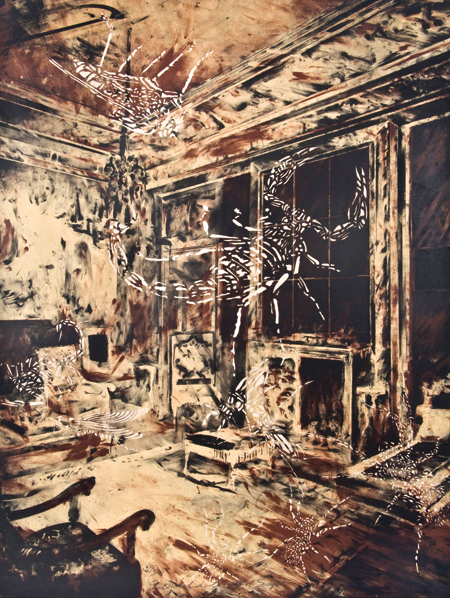 This recent show at Zane Bennett Contemporary Art, in Santa Fe, paired prints by two significant artists: the German painter Georg Baselitz, and Santa Fe-based James Drake. Drake, easily among the most visionary and relevant of contemporary American artists, made two stunning lithographs in the mid-1990s: Salon of Eternal Souls and Salon of a Thousand Souls. Drake's ghostly images of birds in one, and insects, spiders and scorpions, in the other, superimposed over haunted interiors that could be the lobbies of formerly grand hotels or museums fallen into disuse and neglect, may suggest something of human folly and the triumph of nature. Looking at them, it's difficult not to think of Poe's "The Conqueror Worm." These two prints are the only pieces by Drake represented in this small show, but they are seminal works that seem to reference antiquated salon style exhibitions, and their vanishing legacy. Georg Baselitz, known for his neo-expressionist figuration, is better represented, with etchings, aquatints, and woodcuts from several series of prints.

Baselitz' recent woodcuts, in particular, are shown to good effect. The series called Big Night contains a bold but economic use of line. These abstracted depictions ofÊmale figures with erect penises are made particularly disturbing by the presence in each of death's head imagery. Like Drake, Baselitz' work honors an artistic heritage without apparent sentimentality. The Big Night series may be superlative. The bird in Baselitz' etching Seeadler (noir) pairs well with Salon of a Thousand Souls but a comparison of related imagery does not explain this double billing. These works by Drake and Baselitz are visually strong and thematically brooding. More of Drake would possibly overpower the other works, not the least because of their much larger scale; while a solo exhibition ofÊeither artist's prints would be equally welcome, the contrasts between them intrigue. Drake's subdued hues and internal contradictions share an affinity with film negatives whereas Baselitz' prints, full of their own contrasts, vary dark and light with lurid use of color. Two etchings, Fortuna (bleue) and Gute Hoffnung (rouge), were hung separately from the rest of the exhibit. These pieces are less representational than the Big Night series and would, perhaps, feel out of place among the predominantly representational works. The main floor at Zane Bennett is a challenging space to hang; they show a lot of artists all at once. Although at times this can be distracting, ultimately it did not diminish the exhibition's dark, unsettling edge.