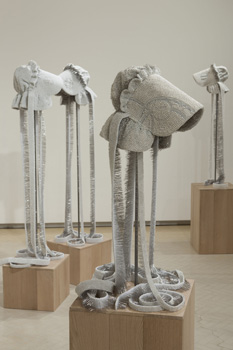 In a provocative move, this joint exhibition “Seeing is Believing” brings together two women whose work is informed by a past affiliation with the Church of Jesus Christ of Latter-day Saints. Neither Angela Ellsworth nor Rebecca Campbell belong to the Mormon Church any longer, but their separate messages on gender, sexuality and spirituality certainly leave viewers wondering whether their religious upbringing enlightened them or scarred them - perhaps both, or neither.

For instance, Ellsworth’s installation “Well, I’ve Been Standing Here” consists of the footrests of a stair machine on a platform of stairs in front of a curvilinear scene of puffy clouds and blue sky suggesting heaven. But the footrests are on the platform backwards, hinting at a failure to ascend. Another installation addresses Ellsworth’s family history of polygamy: her great-great-grandfather, the Church’s fifth prophet, had nine wives. The arresting “Seer Bonnets” presents nine Mormon pioneer sunbonnets, each made of 20,000 pearl corsage pins - impossible to wear but admirable in execution. The bonnets are beautiful and sadistic at the same time.

Campbell takes on her religious and cultural heritage with “Liebe Mütti,” in which avant-garde books by Proust, Kafka and others get wedged into a vintage avocado double oven; the oven’s clock runs backwards. Another surreal encounter is the installation “Do You Really Want to Hurt Me?” in which the branches of a black-velvet-wrapped avocado tree hold forth glass birds filled with Windex. Both works offer commentary on women’s domestic roles in Mormon society. Sexuality is addressed in two vibrantly rendered Campbell paintings: “Jack and Diane” presents guilty young lovers in an autumnal grove. “Daddy Daughter Date” is a modern scene of a father awaiting his fancily dressed adolescent daughter for a night out. Yet the father’s distant stare could portend menace.

These are weighty themes for a relatively small show that is well worth viewing and reflecting on, given that the implied messages will create discomfort for more religious viewers.