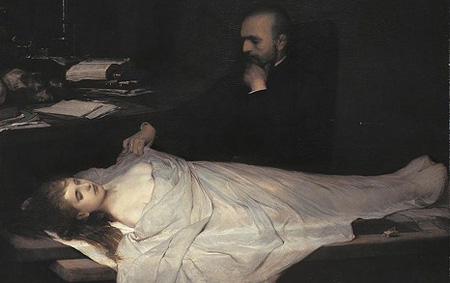 Gabriel von Max was one of the most well-recognized German painters of the late 19th Century (1840-1915), though this is the first museum exhibit in the U.S. to survey his work. “Be-Tailed Cousins and Phantasms of the Soul” features pensive young women in religious narratives or depictions of the occult. Max's most famous work, “The Anatomist”, presents a bearded man uncovering the pale, naked body of a dead woman for presumably scientific examination.

Max possessed twin fascinations with our origins and the afterlife. His portraits focus on Biblical characters, scenes of female Christian martyrs during Roman times, and, as an avid reader of Darwin, studies of monkeys (which Max kept as pets and lived with for many years). Delicately-rendered oils on canvas depict women with dewy, flawless skin, strong noses, and soft jaws. No matter the subject – a nun, a seer, the Virgin Mary – nearly all of Max's women are classically beautiful. This is a striking show, exhibiting a dark undercurrent and an overwhelming appreciation for feminine beauty.