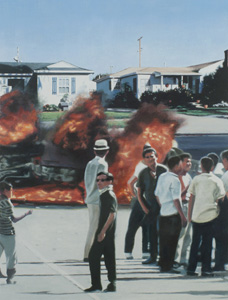 Although you may know him as Roseanne's gay boss or the voice of Father Donovan on American Dad, Martin Mull was actually an artist long before he ever made it to the screen, and from the looks of his new show, "Split Infinitives," he spends at least as much energy on his paintings as he does on being a funny guy.

The paintings are not so funny - "Comedian" is a black and white oil on linen of a man hunched over watching TV; behind him a woman is lying on a low bed with an arm thrown over her eyes like something hurts. Like the photo it was taken from, the man's face is a blaze of white TV reflection. Not surprisingly, Mull tweaks and reconstructs the idea of a Hollywood set by constructing his not-quite-seamless content using bits and pieces of photographs gleaned from found and personal sources. Like grimly detailed storyboards, the implication of narrative adds suspense, but it is the relationship between the men and women in each work that really provokes.