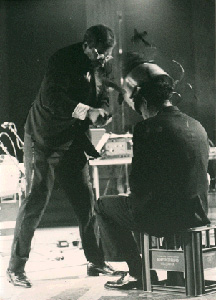 We get in on the Fluxus after-party with an overdue survey of the work of Benjamin Patterson, one of the movement's less-lionized guerrillas. Patterson helped pioneer experimental music and sound performance in New York in the early 1960s, and developed his own esoteric visual language, which took the form of direction poems published in illustrated booklets, densely geometric musical scores, and playable sculptures. The composer of Fluxus standards "Paper Piece" and "Lick Piece," he could undermine the tyranny of the art marketplace as handily as Fluxus's biggest stars. The too-brief video and audio snippets on display reverberate with a madcap joy.

But as the assemblages he began making in the late '80s (after a 20-year hiatus) indicate, the mischievously rudimentary nature of his Fluxus-era creations offered only a tiny window into a deeply complex thinker who has a penchant for rejigging systems. His more recent sculptures and collages have lost some of his generation's galvanizing distaste for authority while retaining its scavenger aesthetic, but except for a few didactic critiques of commercial culture, this show will reward close study.

Appropriately, the "Old Chinese Proverb" he spells out with plastic magnetic alphabet letters in one of his desk sculptures ends with the phrase: "I do and I understand." It's both the thread that runs through Patterson's body of work, and a timeless instruction to the viewer.