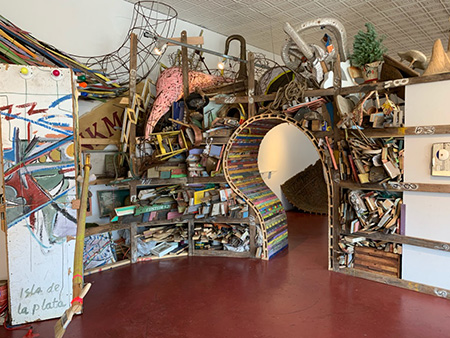 Patrick Renner is best-known for ambitious public sculptures which first enjoyed broad public attention with “Funnel Tunnel” at the Art League Houston in 2013. At 180 feet long, it occupied the street median in front of the Art League and was executed in Renner’s distinctive style of strips of painted wood woven together with wire. The found wood remains a major material component of his work. They have, however, grown to encompass all manner of other found objects. According to Renner, the saying “one man’s trash is another man’s treasure” is the guiding principle of his creative practice. “As a high school art student of modest means, I took notice of the abundance of architectural refuse that showed up at regular intervals on Houston streets.” More than 20 years later, Renner is still collecting and using discarded materials.

The list of materials that comprise Renner’s “Scum Angel” is long and detailed. A wall installation, it is framed by undulating curves of metal tubing from a wire cart that encloses a painterly collage of found wood, paint chips, vintage wallpaper, spray paint and much more. To this he has attached various objects, many of which have sentimental value — his grandmother’s paperweight, assorted knobs and drawer pulls, various bits of hardware, even a mud dauber’s nest. The result is miraculously not a bewildering hodge-podge. The same is true of “Green Thumb,” a paisley-shaped construction 14 inches deep. The found wood elements have been selected on the basis of color, which ranges from shades of green to pale blue to turquoise, their distressed quality adding intrigue to the textured surface. In Renner’s words, “Each painted board is embedded with the story of its existence, albeit unknown to me, and no two are the same.”

The largest and most ambitious piece in the show, however, is a sculptural environment that resembles a bridge connecting a substantial room divider to the gallery’s back wall. A keyhole-shaped arch allows passage through the wall, which contains numerous shelves stuffed with thousands of pieces of wood, wire, metal, and even a small Christmas tree. This piece provides a glimpse into what Renner’s studio must look like — overflowing with the raw material he uses to construct his artwork. The material properties of the objects are used to create a spatial presence that is activated by the viewer. Rather than being outside the piece, we become part of it.

Although academically trained, Renner learned woodworking from his grandfather, whose ancient and well-worn workbench is included in the show, as well as his father’s workbench, which leans against a wall nearby. They reside alongside Renner’s childhood chair, which was constructed by his grandfather, painted by his father and subsequently used by the artist before being passed down to his young son. Utilizing family keepsakes, weathered found objects and other refuse is Renner’s way to connect not only with his past, but with people he will never know and with whom he makes a connection through these cast-offs. Renner weaves raw and sundry materials to create sculptures that serve as metaphors for personal relationships that enlarge the world he inhabits.