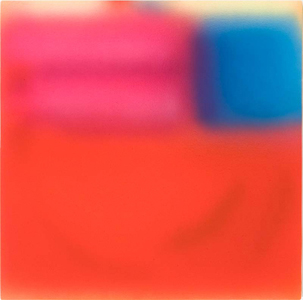 When the sort of meticulous effort of conception enters a body of work as intricately as it has Tim Bavington's current exhibit, it is clear that each work in the oeuvre is representative of something in and of itself. Bavington's Technicolor striped paintings, beyond seeming synthetic polymer versions of Ribbon Candy, act as a bridge over the visual/aural divide - a bridge variously slatted, but sturdy.

Each stripe, of certain width and color, represents a matched note on the musical scale that Bavington uses to paint "covers" of hit songs of the past half-century. "Sweet Child of Mine" by Guns N' Roses is re-recorded in a bright neon plane of blues and pinks and oranges, resembling a digitally disrupted sunset over water. In "Have You Been (Experienced)," Jimi Hendrix's refrain falls like vertically dripped kool-aid across the canvas. Bavington's lines, edgeless, out-of-focus, bleeding vibration, read like reverb. Before experiencing the exhibit, compose a playlist to accompany you there and away. The notes will beat strong in your ears like the colors in your eyes.