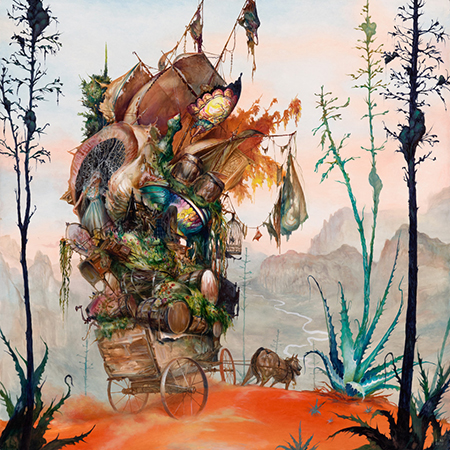 Two small paintings that hang side-by-side just inside the gallery entrance reveal important threads running throughout Esao Andrews’ current exhibition. “The Range” depicts a cart loaded down with baggage, moving towards ribbons of water with no apparent driver beyond a horse steering its course. To its right is a still life titled “Bouquet,” a short vase covered in bulbous ooze containing several flowers and a trio of stems tipped with three small bunches of long black hair. Human figures, animals, imaginary creatures, and natural elements all figure in Andrews’ imagery, often morphing gradually from one to another. His are worlds both real and fantastical. Blurring the boundaries between the familiar and mysterious, the artist lures us from the real to the imaginary, a space where his subjects are surrounded by chaos or gathering storm clouds. Yet it all feels eerily calm and seemingly anchored by some inner quietude.

The exhibition includes more than three dozen works, primarily oil on panel paintings dating from 2004 to the present. “The Crying Hand,” with its elongated fingers and palm facing upwards, reveals an embedded eyeball soaked in tears. Two teardrops are poised to drop from the hand, like a swell of existential exhaustion that’s impossible to contain. The exhibit also highlights the range of Andrews’ technical chops — including a mural and a wall with three rows of painted skate decks. Sketches for several paintings that are also on view hang on a salon wall, allowing us to see the progression of those works. Andrews has spent a lifetime collecting images and ideas from books, television and other media. Hence, his paintings are not only a contemporary form of surrealism, but also an insightful encapsulation of the forces that have shaped the evolution of pop culture during the late 20th and early 21st centuries.