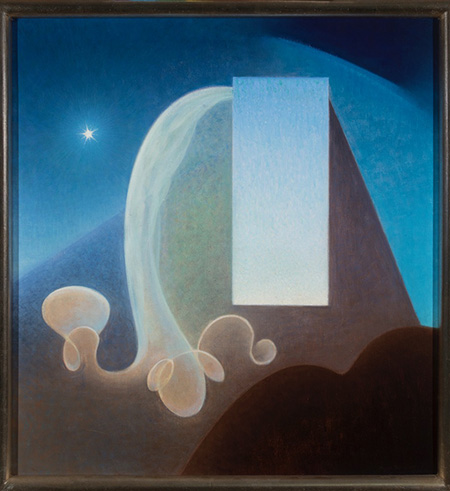 Agnes Pelton (1881-1961) was an American modernist painter whose works are poised the intersection of spirituality, desert landscapes and abstraction. This survey includes more than 40 of her oil on canvas paintings spanning more than four decades. Anyone familiar with Georgia O’Keefe will recognize in this work a related hybridization of organic forms and curved abstractions.

Curator Gilbert Vicario sets Pelton’s paintings in context, with a wall graphic timeline of the artist’s life that shows when she developed an interest in theosophy that inspired a move to the California desert. Esoteric books, including some that were read by Pelton, fill a display case. The exhibit calls to mind other artists who embraced the connection between abstraction and esotericism, particularly Hilma af Klint and Wassily Kandinsky. Text panels for several of Pelton’s earlier works include the artist’s poetry, and some elucidate the ways her artwork explores both personal and philosophical themes. Human figures are sparse in Pelton’s works, making them striking when they do appear. Two paintings, “Mother of Silence" (1933), and “Awakening (Memory of Father)” (1943), reference the artist’s parents. Another, “The Being: A Transcendentalist Vision” (1934), features a seated Buddha-like figure.

Pelton often favors shapes that seem to dance in the depicted light, infused with movement that hints at their underlying energy. At times, her paintings channel recognizable forms: birds, clouds, burning embers, flowers and rainbows. Concentric circles surround a central orb of light in “Focus” (1935), in which other shapes resemble oceanic or botanical forms. A rare vertical rectangle signals the presence of a door in “Day” (1935). Collectively, these works elucidate the artist’s facility for capturing inner experiences and connectivity between worlds seen and unseen, then translating them into visual prompts towards self-awakening and transcendence of materiality and the mundane.