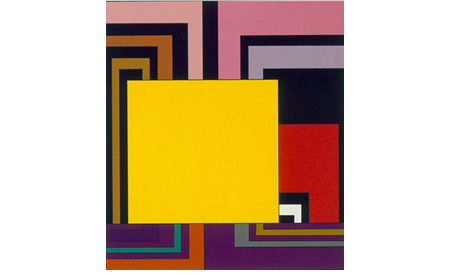 Three solo shows share color, line, and form in distinctly different expressions and mediums. Mary Shaffer’s slumped glass and metal are effectively presented as an installation. The glass in all of her artworks allows the old metal tools a new clarity at the same time that it softens their effects, moving them from out of the barn or basement into the warmth of daylight. Peter Halley, known for his highly colorful geometric paintings from the 1980s, keeps the flame aglow with a series of serigraphs from the early ’90s into the ’00s. These prints are coolly lovely, yet passages here and there of primal color (“Exchange,” 1996, is a good example) are charged with a messy vitality that gives release to the wrapped-tight strategies of neo-geo. Finally, Gunter Forg’s large scribbles of acrylic and oil on unpainted canvas are bright as a child’s refrigerator masterpiece, with the same innocence and joy. His monotypes are denser and more reflective, yet carry the same coloring-book urgency as do his paintings.