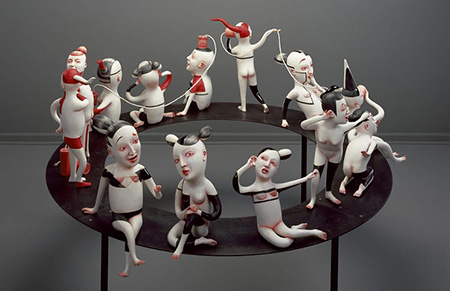 Patti Warashina explores some of the most vexing issues of the day, from social media obsession to political corruption. But rather than taking a heavy-handed, dystopian approach, she creates works that exude whimsy and humor. They're qualities in short supply during the present age of anxiety, and they give us breathing room to thoughtfully consider both personal choices and the wider cultural context without reinforcing the prevailing tribalism. For “Gossipmongers,” Warashina sets a dozen or so figures on a circular stand, giving them tin cans with strings, like children used to play telephone tag. Nearby, five figures sit in a row on a shelf, positioned towards a red “x” on the gallery floor that seems to mark where a reality shoe contestant might stand. But for “Scrutiny,” it’s everyday people casting judgement, and being judged.

Often, Warashina’s ceramic figures are abstractions for individuals and humanity at large, lacking embellishments that signal details such as age, nationality, or time period. In some cases, she renders specific people. For an amorphously shaped piece titled “Democracy on the Run,” she’s included well-known politicos, including Donald Trump. And she’s added words culled from contemporary political rhetoric: voter manipulation, press, dreamers, tax debt and more. Another piece, “A Pussy in Disguise,” depicts Trump with an animal twist, holding a mask of Putin’s face. Even North Korea’s Kim Jung-un gets his due, on a piece that sets him atop a tank surrounded by missiles. For “Trigger Happy & the Flywheel Effect,” Warashina replaces the head and limbs of a human figure with handguns, creating a piece that looks like an absurd carnival attraction even as it calls out the endless cycle of violence prevalent in American culture. We are free to agree or disagree with the way she’s rendered current issues and personalities, but either way there is an inherent charm to Warashina’s use of humor and absurdity to provoke thoughtful reflection on both the current national landscape and our own interior world.