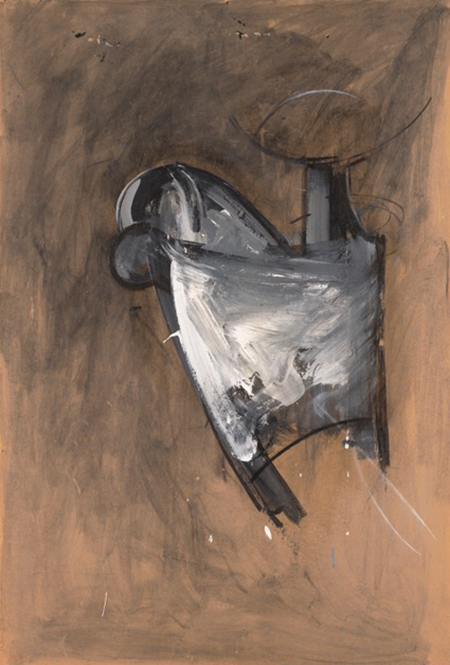 This astute exhibition of nearly forty works on paper by Jay DeFeo narrows the lens on an artist who defies categorization. DeFeo was associated with the West Coast Beat movement in San Francisco during the 1950’s, where her peers were artists like Wallace Berman and Bruce Conner. Some time later in the 70’s, her turn away from painting led to an exploration of everyday objects in the studio through drawing, collage, photography, and xerography. This exhibition is a master class on DeFeo’s pursuits at the time, bringing together excellent examples from three bodies of work, each equally compelling and mysterious.

From the “Tripod” series, “Figure V” (1976), a graphite and acrylic drawing, is a profound example of how DeFeo transforms the tripod motif into both a figure and a drapery study, wrapped up with a contorted sense of motion. She brings that energetic movement to the “Compass” series, with its characteristic faceted planes. They are rendered with a jagged, choppy, sense of action that refers to Dada machines as painted by Marcel Duchamp or Francis Picabia. The exhibition was curated by Paul Galvez, a frequent collaborator with the gallery, who explains the relationship the pieces here have to the historical avant-garde. Of course, the work speaks for itself as well as to DeFeo’s nod to the past, making it absolutely clear that she established an original style expressive of her time period and the turn toward new media that was just under way.