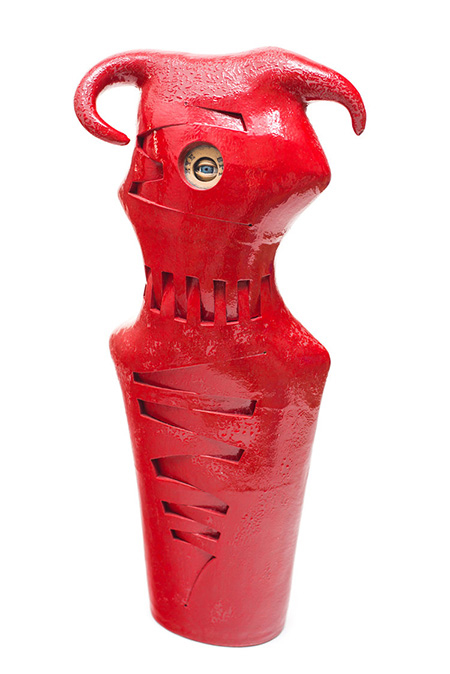 Susan Budge has worked with clay for as long as she can remember, saying that “touching clay for the first time was an epiphany.” Her work has many references to the Paleolithic “goddess” figures from prehistory that were linked to motherhood and fertility. Although Budge has practiced as a ceramic artist for more than 40 years, the birth of her son in 2003 has had a direct influence on her work since. The fierce instinct of maternal protection manifests itself in the large totemic pieces, which she refers to as guardians or sentinels. Budge has said that these guardians also represent the spirits of people she has loved who have passed away.

Budge is fascinated by the human figure. Some like “Gold Guardian” are tall and slender, while others like “Eye Spy Red” embody the curvaceous female figure and are intensely sensual. Many have a realisticly painted eye embedded in them, usually near the top in what is perceived as the “head” of the piece. In the smaller works, which she refers to as “objects of affection,” the eye is located in the center. According to Budge, she began using the eyes when she noticed that her young son was watching her constantly while she was working in the studio.

Budge has an affinity with the surrealist reliance on the subconscious in the creative act. By working spontaneously rather than rationally, her sculptures are pushed to reflect that tendency. A bulbous piece titled "B.B.'s Ghost" mimics the form of a lover who has passed away, but she did not realize that until it was completed. “When I wrapped my arms around the sculpture to pick it up, I realized that its circumference was the same as his,” she said. Its subtle coloration is the result of a five-day wood firing, during which time the fumes from the burning wood created intriguing markings and glass deposits on the piece.

Budge’s surfaces range from gleaming reds and blues to more subdued grays and golds. Displayed on brilliant red walls and pedestals, these anthropomorphic sculptures create a powerful and compelling environment.