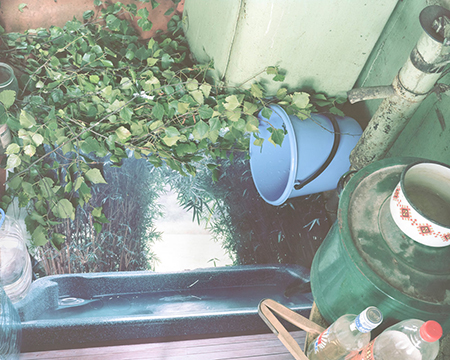 Examples from several bodies of work occupy this exhibition by photographer Svetlana Bailey, illustrating the artist’s affinity for ordinary objects. “Once there was there wasn’t,” the most emotionally potent series that also shares the exhibition title, is Bailey’s study in the way that common objects can be steeped in personal associations and individual memories. The artist returned to her late grandmother’s abandoned home in a rural part of Russia to photograph the remnants that correspond to memories of her childhood spent there.

Bailey, however, is not simply documenting this site. She adds images and items from later in her life, photographing photographs and manipulating perspectives to suggest the inconstancy of memory recall. In one image from this series, “feast,” a flat, large-scale image of a reedy pond is the backdrop for a table leaden with tropical fruit, silly straws, a Russian tea pot and a frozen pizza still wrapped in plastic. This scene is vivid, familiar and yet noticably unreal. Fusing the ordinary with idealism and nostalgia, Bailey captures the nature of that which imprints our recollections.