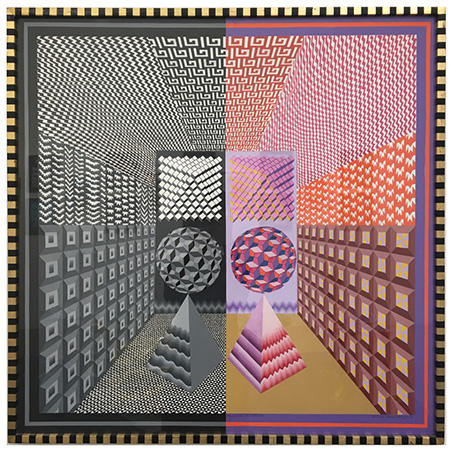 Noted Mexican artist and designer Pedro Friedeberg (b. 1936), active since the 1960s, is best known for his "Hand Chair" (designed in 1962), a surrealist-inspired work that literally seated people in the palm of a hand, using the fingers as a backrest. Among the more than sixty works on view in “Tetragrammoebius," most dating from 2016 and 2017, are examples of his furniture, paintings and drawings. Friedeberg's work is a complicated and visually dynamic mix of Op Art, Pop Art, Surrealism, religious symbology and architecture. His detailed and patterned abstractions are mesmerizing as well as disorienting.

Many of the works sit upon blue platforms and pedestals, and the largest painting is hung on the same color blue wall. The rest of the works filling the gallery walls allow us to compare and contrast two- and three-dimensional works. Friedeberg, who still resides in Mexico City, was part of the group (including Leonora Carrington and Remedios Varo) of politically minded artists who rejected then dominant aesthetic trends in favor of cultural critiques that were surrealist in attitude. While Friedeberg has exhibited internationally, this is his first solo gallery exhibition in Los Angeles for over 30 years.