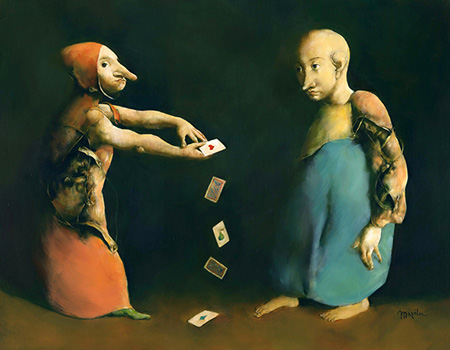 Tucked in an inner room here is a series of portraits and vignettes that might have been convincingly pulled from Hieronymus Bosch’s "Garden of Earthly Delights." Romanian artist Georges Mazilu’s “A Survey of Paintings and Drawings” is both other-worldly and surprisingly human. Mazilu’s work is rooted in dualities. Both classically trained in portraying the human figure as a master in realism, and at one time a strictly abstract artist, Mazilu's paintings recall both the portraiture of the Renaissance masters, and a futuristic world of fantastical creatures and fairy-tale-like characters.

Set against dark minimalist backgrounds, Mazilu rarely conducts any planning for his figurative-based compositions. Often starting with abstract forms, his subjects grow out of his imagination, letting the characters in his paintings unfold naturally. He explains, “I try to keep my logic from interfering, and slowly convert these signs into figures as late in his process as possible, when a strong suggestion appears.” By working improvisationally, and allowing abstract forms to become figurative, Mazilu’s characters appear caught in a liminal space between object and human, as if the subjects in his paintings are puppets come to life. While each piece depicts a private scene or portrait, Mazilu works in rich blues and greens that connect the works that implies all of these creatures and characters exist in the same world. While Mazilu’s world is strange and a bit unsettling, it is certainly a pleasure to witness.