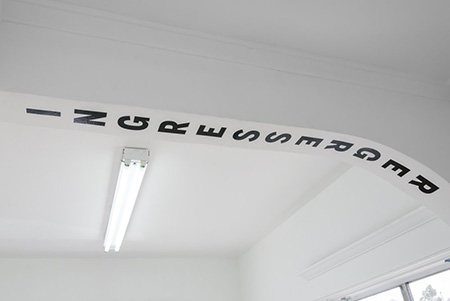 This uber-eclectic group show, “A Spaghetti Dress for World Peace," presented in a one-bedroom-apartment-cum-gallery, is as much about the intimate experience of its context as its esoteric objective, inspired as it is by the fashion designer Miguel Adrover. Several of the works charm with the seemingly contradictory mixture of the conceptual and the heartfelt. Apart from a Tom of Finland preparatory drawing that’s explicit even by his standards, highlights begin with Victoria Colmegna’s wall-mounted vitrine filled with several tart, commissioned sketches by the illustrator of the “Sweet Valley High” series’ book covers. David Muenzer’s pastel drawings feature a globe-headed figure who is alternately persecuted and every-man. Heji Shin’s “#lonelygirl2,” depicts a convincingly real monkey counting money from the wallet that it has apparently made off with.

The wittiest works are from Dana Yago, whose black vinyl letters march across three separate overhangs throughout the apartment (two archways, one straight). While they may appear to be the same counter-directional text repeated in separate locations, in fact each one is different: “INGRESSERGE,” or egress (right to left) ingress (left to right); “REGRESSSERGNI,” or ingress, regress; and “EGRESSERGER,” or regress, egress. As opposed to referencing birds, or the painter Ingres, they refer to Ingress, Egress and Regress, words that “express the right of a lessee to enter, go upon, and return from the lands in question” (as in a property), according to thelaw.com Dictionary. There’s much more going on in this very modest apartment-gallery than you may be able to fully process onsite. This show makes a strong case for the value of in-real-life engagement in an increasingly virtual world.